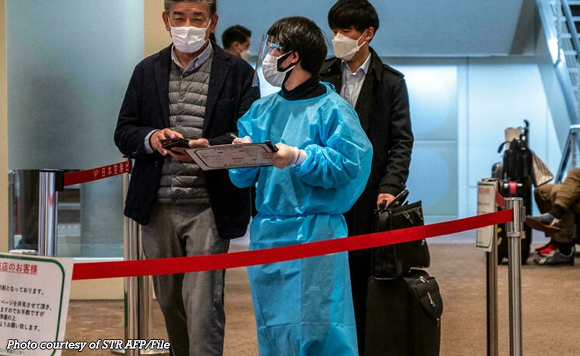 Yanita Antoko has been waiting for more than a year in Indonesia to join her husband in Japan. She has her papers and has closed her business selling homemade spice mixes, but remains excluded.

The 30-year-old is one of more than 370,000 people left uncertain by Japan’s coronavirus border rules, which ban nearly all new arrivals and are the strictest in the G7.

Even as other countries with strict virus restrictions like Australia reopen, Japan is still banning tourists and business visitors as well as new foreign workers, students and their dependents.

“It really, really upsets me,” said Antoko, whose Indonesian husband works as an engineer in central Japan.

“When you get married, of course you want to have children. That’s the main reason why we want to live together.

But there is no clarity on when that might be possible.

Prime Minister Fumio Kishida has extended the current measures, which polls show are popular with the public, until at least the end of February.

That leaves people like Santosh, a 28-year-old Nepalese, in a harrowing position.

He has a business degree from Japan, speaks Japanese, and was offered a job in the international marketing division of a Japanese company. But he has been stuck in Nepal since 2020, waiting for permission to move.

“If I cancel my plan to work in Japan, then my six years of study there will have been for nothing,” Santosh, who asked to be identified without his last name, told AFP.

The 21-year-old, whose fiancé is in Japan, takes her Japanese lessons in the evening due to jet lag.

“It’s a nightmare,” she told AFP, describing language lessons that end at 4 a.m.

And while she still hopes to build a career promoting Japanese bands, she said being separated from her Japanese fiancé left her “feeling empty, like half of my soul had been taken away.”

– ‘Out of reach’ –
Academics and business leaders warn that Japan is losing out with its intransigent border rules.

“Expertise is on the decline” because companies cannot bring in foreign workers, said Michael Mroczek, president of the European Business Council in Japan.

With infections already spreading in Japan, the restrictions “seem to some extent irrational”, he told AFP.

Japan has recorded a relatively low number of 18,500 deaths during the pandemic, although it has never imposed a full lockdown or pursued a “zero-Covid” policy like neighboring China.

A Foreign Ministry official defended the “strict (border) measures” as helping to explain the “significant difference between Japan and other countries” in the number of infections involving the Omicron variant of the virus.

But in the Japanese business world there is frustration, with the head of the powerful Keidanren business lobby on Monday comparing the rules to Japan’s self-imposed isolation from the 17th to 19th centuries.

The measures are “out of touch with reality”, Masakazu Tokura said, urging Kishida to reconsider.

In an open letter to the prime minister last week, scholars involved in Japan-US exchanges also warned that the entry ban “undermines Japan’s diplomatic goals and its status as an international leader”.

– Students looking elsewhere –
Davide Rossi, an Italian entrepreneur living in Japan, is campaigning for nearly 150,000 students, according to official figures, to be stranded outside the country.

“They’ve been in this stalemate for two years but still don’t have a timetable or a plan, which is the minimum the government should give them,” he told AFP.

He described his frustration when the outcasts watched tens of thousands of foreign athletes, officials and media enter Japan for the Olympics last year.

Students are “100% willing” to test and quarantine like returning citizens and residents, Rossi said.

But so far there have been limited humanitarian exemptions and only 87 government-sponsored students have been allowed into the country.

With no end in sight, many students are now looking elsewhere, including in South Korea.

Hana, a first-year doctoral student in veterinary science from Iran, is studying remotely at a Japanese university, but she cannot complete her essential lab research remotely.

She reluctantly set herself an April deadline to travel to Japan.

After that, “I will consider another country, maybe Canada or the United States,” the 29-year-old said.

“If we can’t get in, most of us will abandon Japan.”