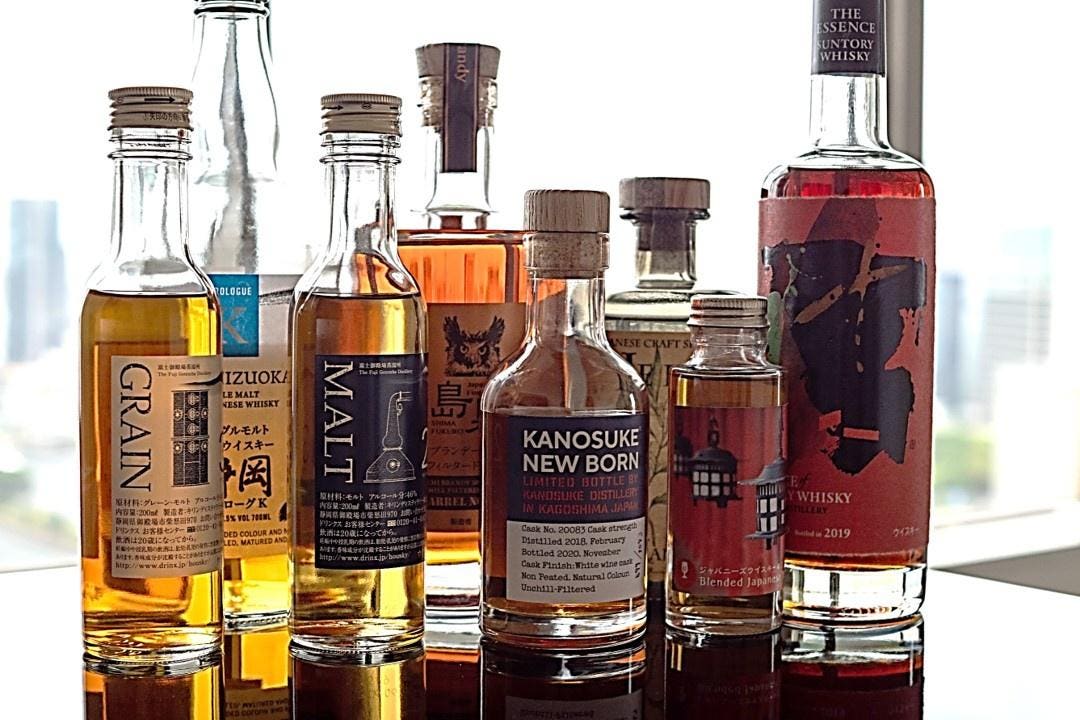 Over the past decade, Japanese whiskey has been one of the most preforming sectors of the international whiskey market. Between 2010 and 2019, US imports of Japanese whiskey increased fifty-fold. According to The Single Malt Fund, in 2020, the “RW101 Apex 1000, the benchmark for rare whiskeys, rose steadily by 6.7%”, while the “RW Japanese 100 increased by 18.7%.

Recently, I sat down with Liam McNulty to talk about the state of Japanese whiskey and its impact on the recent adoption of new labeling rules.

Liam McNulty has lived in Tokyo since 2008 and directs nomunication.jp, an English blog on Japanese whiskey and spirits. He also sits on the executive committee and is a judge for the Tokyo Whiskey & Spirits Competition.

LM: The new standard introduced to define Japanese whiskey is industry led and implemented by the Japan Spirits & Liqueurs Makers Association (JSLMA). The JSLMA standard allows the import of malted barley and other grains, but the water must be extracted in Japan. It also requires saccharification, fermentation, distillation, maturation and bottling to occur in Japan.

Maturation must be at least 3 years and in a wooden barrel of 700L or less. They deliberately failed to require the barrel to be oak to allow other woods such as cedar, chestnut and / or cherry. They also require the spirit to meet the National Tax Agency’s definition of whiskey: this prevents koji spirits like shochu from being labeled as Japanese whiskey.

The law defining the categories of alcoholic beverages in Japan is called the Liquor Tax Law, and it remains unchanged. The Liquor Tax Act definition of “whiskey” requires that only 10% of the final product be whiskey, as the rest of the world knows. The remaining 90% can be molasses-based spirits, for example.

The law makes absolutely no mention of Japanese whiskey. From what I understand, the National Tax Agency (NTA) also has no intention of changing the law: their main concern is tax revenue, rather than protecting the brand image of Japanese whiskey. Since Japanese whiskey has overtaken sake to become the country’s most valuable alcoholic beverage export in 2020, I hope they will see the big picture soon.

Because the law has not been changed, it is still not illegal to label a whiskey, whether made in Japan or not, as Japanese whiskey. Not all licensed distilleries or bottlers in Japan are members of JSLMA either, so the JSLMA rules are certainly not exhaustive. And it’s right here in Japan; global protection for the category is also required. There is still a lot of work to be done.

JM: On average, what proportion of the whiskey labeled as Japanese whiskey is actually produced and aged in Japan and what percentage is actually imported foreign whiskey?

LM: I unfortunately don’t have any data to back this up, but the figure I heard is that the above JSLMA standard will apply to around 10% of the volume of whiskey in the Japanese domestic market.

The vague legal definition of whiskey means that the lion’s share of the whiskey market in Japan is made up of whiskey-like products that fuel izakaya highball culture. These aren’t the kind of bottles connoisseurs look for, but they are an important part of Japan’s relationship with whiskey, then and now.

The makers of these bottles know that the vast majority of the Japanese public are not very concerned about the provenance of the whiskey in their 350 yen highball. Even though the products aren’t considered Japanese whiskey under the new standard, it shouldn’t really impact sales.

The overseas market is a different situation. These cheap whiskey products cannot be labeled as whiskey in many overseas markets, so they are generally not exported. Where major players have not been able to meet the growing demand for genuine Japanese whiskey overseas, other companies have stepped in.

Some import foreign whiskey in bulk into Japan, bottle it here, and label it as if it were Japanese whiskey. Others export barrel-aged shochu and refer to it as Japanese whiskey. Still others have built their own whiskey distilleries and fully support JSLMA standards.

JM: Is the use of foreign whiskeys limited to blended whiskeys or does it include Japanese single malts?

LM: Usually these are blended whiskeys, but there are many bottles that use malt whiskey imported to Japan. Pay close attention to the label, as these are usually not labeled as “Japanese Single Malt”. Instead, it is often â€œJapanese Malt Whiskeyâ€ or â€œJapanese Blended Maltâ€.

JM: Is it only Scotland that supplies whiskey to Japan or are other countries involved?

LM: As of 2017, import data provided by Japanese customs no longer distinguishes between bulk whiskeys and bottled whiskeys, so without recent public information it is difficult to say for sure.

Historically, bulk whiskeys have also been imported from Canada, the United States and South Africa. Kirin’s relatively new Riku Land Discovery, for example, looks a lot like bourbon, and it’s labeled as whiskey rather than whiskey. Kirin owns Four Roses. They didn’t explicitly say it, but it all fits together pretty well.

JM: You’ve been pretty tough in the past on what you call Japanese ghost distilleries; that is, brands that bottle their whiskeys as Japanese whiskey, but do not actually produce or source whiskey in Japan. How widespread is this practice?

LM: Given the dearth of authentic Japanese whiskey, I guess the majority of the “Japanese whiskey” you see on the shelves of liquor stores outside of Japan these days is not distilled in Japan. It is difficult to measure the impact.

The nightmarish scenario is that a newcomer to the category pays too much for a bottle of inferior whiskey that isn’t even Japanese. They buy it because they’ve heard good things about Japanese whiskey, it’s in the Japanese whiskey section of their local, there are kanji on the label, and it’s about samurai or geisha. If they’re disappointed, they might never try Japanese whiskey again..

JM: Kurayoshi and Tottori are two Japanese brands that you criticized for relying mainly, if not entirely, on foreign sources of whiskey for their bottlings. Kurayoshi is finally distilling in Japan, although it is not clear if this whiskey has appeared in their bottlings.

I note, however, that Kurayoshi has won numerous awards in international spirits competitions. Are you too hard on them? As long as they are bottling a good whiskey, does it really matter where the whiskey comes from?

LM: Kurayoshi has indeed won prizes in international spirits competitions. I will never oppose bottles winning awards based on sensory experience. Blending is a skill that deserves to be recognized.

But when a bottle doesn’t contain a single drop of whiskey distilled in Japan but wins awards in the Japanese whiskey category in a competition, it undermines the hard work that distillers of authentic Japanese whiskey put in to continually improve their products.

Spirits competitions generally rely on regulations surrounding spirits to define their categories. If a bottle is from an American distillery and falls under an American whiskey category, organizers naturally assume that it was in fact distilled in the United States.

Now that a standard is in place, competition organizers no longer need to start from scratch to establish entry requirements for their categories of Japanese whiskey. The Tokyo Whiskey & Spirits Competition was the first to do so, even before the JSLMA standard, back with the 2020 competition.

I understand there is some movement internally among some US based competition to also align their Japanese whiskey category with the new JSLMA standard. I hope other competitions around the world will follow suit. If they decide to create a separate category for whiskeys that are only â€œblendedâ€ in Japan, that is very welcome.

JM: What do you think are the best values â€‹â€‹for Japanese whiskey today? Can these whiskeys be found in the United States? If not, where can they be purchased?

LM: The days of buying Japanese whiskey matured for more than ten years cheaply are long gone. For many people, the premium associated with Japanese whiskey today is impossible to justify when there is so much good whiskey available in other parts of the world.

That said, the bottles below have crossed the Pacific and shouldn’t break the bank.

Â· Yamazaki 12 can be a great introduction to Japanese single malts, and as far as I know, it’s actually easier to find in the US than here in Japan.

Â· The First Ten of Chichibu had an allowance for the United States. The bottle has been highly regarded as one of the best releases of 2020. It will be nearly impossible to find for a decent retail price, so if COVID allows, grab a drink at a bar.

Â· Mars Whiskey Limited Edition Komagatake is a Japanese single malt whiskey released annually from the company’s distillery in Shinshu. There is also an American allowance for this. It should be relatively affordable if you can find it.

Â· The low-budget bottle for many has been Nikka From the Barrel, but with the new JSLMA standard, Nikka finally had to realize that it wasn’t all Japanese whiskey. It is still an excellent Japanese style whiskey.