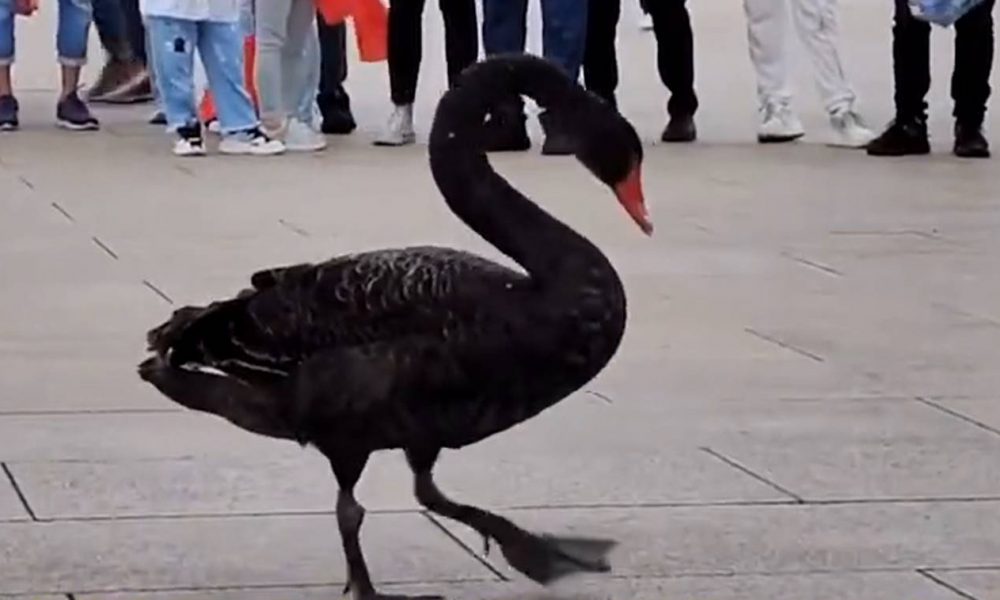 September 5e a single black swan flew to Tiananmen Square in central Beijing, not far from the Zhongnanhai high-security complex where key Chinese leaders and their families reside. The bird then lingered there for some time.

The Beijing Daily (Beijing Ribao) quickly became aware of the unusual phenomenon, posting news of this bizarre event along with photos. The bird tour in Tiananmen Square also quickly became a hot topic of speculation on social media. Why the devil did the bird choose to come to the vast paved square which is totally lacking in water and grass?

It remains a mystery. However, for many people, the incident predictably evoked the â€œblack swan theoryâ€.

This theory argues that the occurrence of a totally unexpected event can cause enormous shock to society and the markets precisely because past experience and common sense cannot explain it.

A classic example is the Lehman shock of September 2008. Another would be the sudden appearance of the novel coronavirus (COVID-19) in the Chinese city of Wuhan in December 2019, which subsequently caused the global pandemic we are facing. today. Arguably this is a terrifying example of a “black swan attack”.

The fact is that in recent years, a feeling of alarm about “black swan attacks” has spread to various parts of China. One of the reasons is the affection that China’s Supreme Leader President Xi Jinping has shown for the use of the term “black swan” in various warnings he has issued.

For example, in a speech in January 2019 on the topic of financial matters at a study session attended by central government and local officials, Xi said, â€œWe must guard against the black swan of risks. of which we must be vigilant. “

Then, in January of this year, admitting that China directly faces various risks and problems, Xi expressed the same concern, saying, â€œWe need to prepare for black swan-type phenomena.

One of the black swan attacks Xi seems to be worried about is the outbreak of a debt crisis. Currently, the total amount of debts incurred nationally by businesses, local governments and individuals has reached 500 trillion renminbi (about 8.5 trillion JPY, or 77 trillion US dollars). That’s roughly the equivalent of five times China’s annual GDP.

When these debts fall due, we are likely to see corporate failures, individual bankruptcies and local governments collapse, one after another.

Of course, the occurrence of such debt crises cannot be dissociated from the onset of financial crises. Therefore, there is a very real chance that the Chinese economy will be beset by a catastrophe of unprecedented magnitude.

Another black swan that has long worried the Chinese is the possible bursting of the real estate bubble.

These troubles are not limited to the economic sphere; there are also many politically.

Li originally released this “groundbreaking statement” as a post on his WeChat account on public social media “Freezing Point Commentary”. The official media all used the same headline when they reposted it: “Anyone Can Feel A Profound Transformation Is Underway!” ”

It is unusual, to say the least, that all major national media directly controlled by the central authorities of the Communist Party of China (CCP) are picking up such a blog post. Even more astonishing was the content of the post.

The article begins by stating, â€œWhat events are telling us is that a monumental change is taking place in China and that the economic, political and cultural spheres are all undergoing a profound transformation – we might even call it a revolution.

He then warily warned: â€œAnyone who tries to hinder the human-centered transformation will be left behind. ”

In other words, Li’s fierce statement seemed to call for the launch of political purges.

Given the recent moves by the Xi regime to intimidate private companies and purge the entertainment world, these people’s fears do not appear to be unfounded by any means.

It is for this very reason that many Chinese have taken the black swan incident that landed in Tiananmen Square as an ominous omen and cracked down on its implications.

But the person who is probably most worried that this black swan is a harbinger of disaster visiting China in the near future is none other than Xi Jinping himself.

(Find access to Sankei Shimbun “China Watch” section in Japanese on this link.)

Exporters must equip themselves for the gun rule