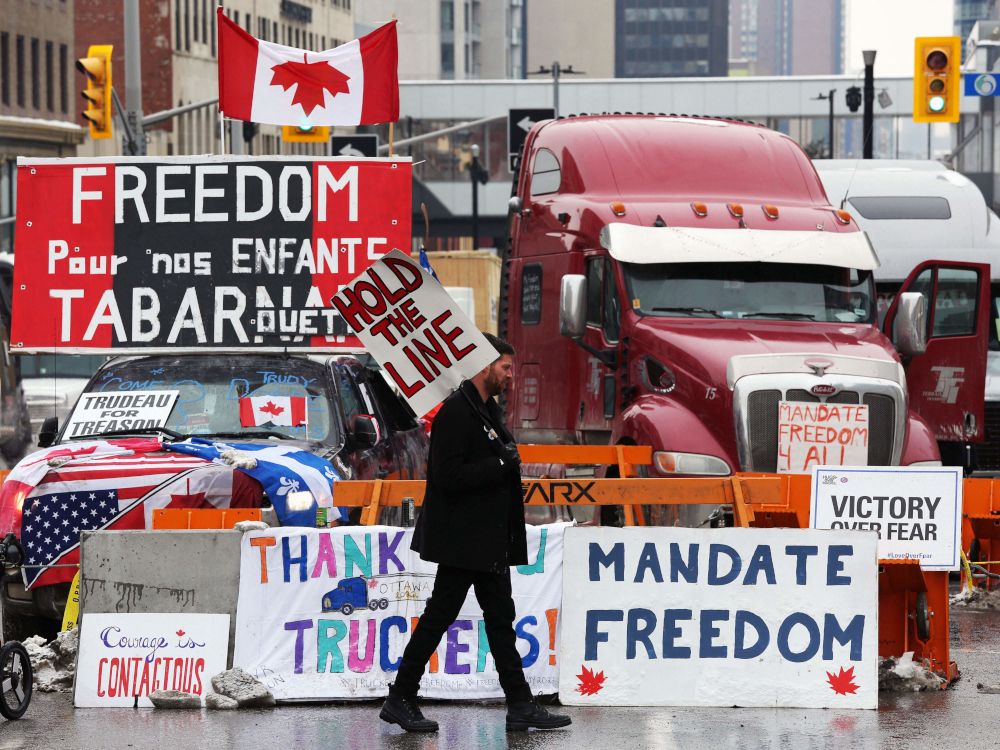 The warning is contained in heavily redacted summaries of three government incident response group meetings and one full cabinet meeting, which were released by the Federal Court in a challenge to government’s use of the law.

Trudeau’s comments on February 12 came the day after his conversation with US President Joe Biden. According to the White House, Biden has expressed concerns about the impact of blockages at border crossings, including the Ambassador Bridge in Windsor, Ont., on American businesses and workers.

“The Prime Minister has promised to act quickly to enforce the law and the President has thanked him for the actions he and other Canadian officials are taking,” the White House said Feb. 11.

At the time, Trudeau was speaking to a number of world leaders about building up Russian military forces near the border with Ukraine. During the first 12 days of February, he met with leaders from the EU, Norway, Poland, Japan, Germany and Ukraine. Minutes from the Prime Minister’s Office for these meetings do not mention the ongoing protests.

But it was a Cabinet priority, the documents show. The weekend before invoking the Emergencies Act, the government was busy weighing the consequences of using the legislation while weighing other tools.

On Saturday, February 12, protesters were using social media to coordinate, starting “slow” protests and involving children in their actions by leading them to blockades to prevent police activity and engaging schools in walkouts, according to the documents.

Minutes of the meeting show that cabinet and senior government, military and RCMP officials were told there was the possibility of engagement with protest leaders, and even a potential “breakthrough” in eliminating the protest in Ottawa.

But the same briefings warned ministers that protesters in the capital were growing increasingly hostile to police and showing a “significant escalation in boldness”.

Ottawa police released a statement Feb. 12 saying there were more than 4,000 people in the downtown area and there had been “aggressive and unlawful behavior.” The Ottawa Police Service, Ontario Provincial Police and RCMP then established an enhanced integrated command center to ensure coordination.

Behind the scenes, RCMP Commissioner Brenda Lucki told the federal incidents group that it was difficult to work with the other forces, citing communication issues and with Ottawa Police Chief Peter Sloly, who resigned the following week.

Meanwhile, police enforcement began Saturday at the Ambassador Bridge after an attempt by the Ontario government to negotiate with protesters failed, documents show, but stalled as the number of demonstrators rose to more than 500.

He also noted that there were reports that former members of the military were advising and instructing the leaders of the blockade, according to the documents.

Transport Minister Omar Alghabra was working to secure tow trucks and drivers. The federal government said tow companies were unwilling to move the big trucks choking the streets of downtown Ottawa, and invoking the Emergencies Act gave police the power to compel them to help.

It was on Sunday that federal officials were told there was “potential for a breakthrough in Ottawa”.

According to Freedom Convoy attorney Keith Wilson, the breakthrough was a deal he worked to broker with city officials. Tamara Lich, one of the leaders of the protest, and Ottawa Mayor Jim Watson exchanged letters on Feb. 12, discussing an arrangement that would see truckers move their vehicles outside residential areas.

“Many Ottawa citizens and businesses have encouraged us, but we are also disturbing others. It was never our intention,” Lich wrote to Watson.

The group printed leaflets explaining that it planned to reposition the trucks from Monday, “so that we don’t give the Prime Minister the excuse that he desperately wants to use force and seize our trucks”.

“Block captains started going from truck to truck and handing out these materials saying, ‘We need to defuse,'” Wilson said in an interview.

But the protest was not a unified group.

On Sunday evening February 13, prominent protester Pat King said on social media that there was no deal and suggested counter-protesters were spreading false information. He told protesters not to move.

But he said several misunderstandings and misunderstandings in the “chaotic environment” had slowed what was already likely a multi-day effort to move truckers on Wellington Street and Sir John A MacDonald Drive.

“We thought we had communication issues,” Wilson said. “Oh my God, have the police ever had terrible communications. So we’re going to move trucks, and then the police won’t let us move.

That afternoon, Trudeau announced the decision to invoke the Emergencies Act.

On February 19, after days of police warnings to protesters to leave, an operation involving hundreds of officers began clearing vehicles and people from downtown Ottawa.

Sign up to receive the best daily stories from the National Post, a division of Postmedia Network Inc.

Thank you for your registration!

A welcome email is on its way. If you don’t see it, please check your spam folder.

The next issue of NP Posted will soon be in your inbox.

We encountered a problem during your registration. Try Again