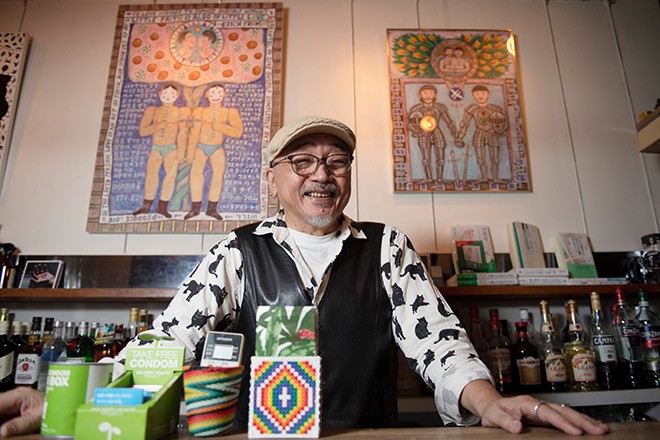 With gay marriage banned in Japan, Takashi Otsuka saw so few legal options that he decided to legally adopt his same-sex partner.

Shortly after, they moved in together. But due to the large age gap between them, Otsuka decided to adopt Shinji as his son in 2013 so that he could leave his money to her if he died.

Under the law, two people cannot legally marry after dissolving an adoption. But Otsuka said at the time he had no hope of them getting legally married in Japan, when the adoption system would firmly protect their relationship as a family.

Otsuka, however, is much more optimistic now that the Tokyo Metropolitan Government is introducing a partnership system that will officially recognize same-sex relationships.

It will start issuing certificates to couples from November 1.

When Otsuka found out about Tokyo’s new partnership system, he thought it would bring them little benefit. It does not offer the same legal benefits as marriage.

But when he read the Metropolitan Government’s explanation of who can apply under the system, something caught his eye: Couples who have chosen to adopt their partner can apply.

The government must think of people like them, he thought.

Thus, he and Shinji filed for partner status together on October 14.

Although the partnership is still a long way from legalizing same-sex marriage, Otsuka said he believes it represents hope that marriage will be possible in the future.

While similar partnership systems already exist in Japan, only around 10% of local governments in the country have one in place. But they now cover more than half of Japan’s population.

According to a joint survey by the Shibuya Ward Government and Nijiiro Diversity, an Osaka nonprofit that advocates for the rights of sexual minorities, 239 local governments, including nine prefectures, had systems like this as of 11 October, covering 55.6% of the Japanese population. population.

This figure will exceed 60% once Tokyo introduces its system.

According to the organization, 3,456 same-sex couples across the country had been officially recognized through partnership systems by the end of September.

The Tokyo Metropolitan Government began accepting applications on October 11. As of 9 a.m. on October 28, 137 same-sex couples had applied.

Under these partnership systems, same-sex couples can apply for official recognition of their union by taking an oath or submitting a notarized document proving that they are living together.

Under the Tokyo system, couples can apply online by submitting their family record book, residence certificate and ID.

Obtaining official recognition through the system enables same-sex couples to apply to move into public family apartment complexes and apply for social benefits for people in the same household.

They are also allowed to visit their partners when they are hospitalized in facilities run by central or local governments, and they can give consent for doctors to operate on their sick partners.

When a member of the LGBT community applies for a mortgage, some financial institutions will consider their partner to be a spouse if the couple is officially recognized by their local authority.

Some insurers will allow them to benefit from their partner’s life insurance if they form an officially recognized couple.

Some companies will also grant them access to spousal benefits.

But they will still be denied many privileges even if they gain recognition of a partnership.

This includes inheriting property from their partner after their death, joint custody of children and using the “spouse deduction” system to deduct a certain amount from taxable income.

Same-sex couples have filed lawsuits across the country arguing that banning same-sex marriage violates the Constitution, which guarantees “freedom of marriage.”

But the judges have been divided in their opinions so far.

“The partnership system has spread rapidly, which shows how desperately people who live with same-sex partners need legal protection,” she said. “While they feel a sense of security brought by recognition by public bodies, they also feel that the legal benefits of the system fall far short of those of marriage.”