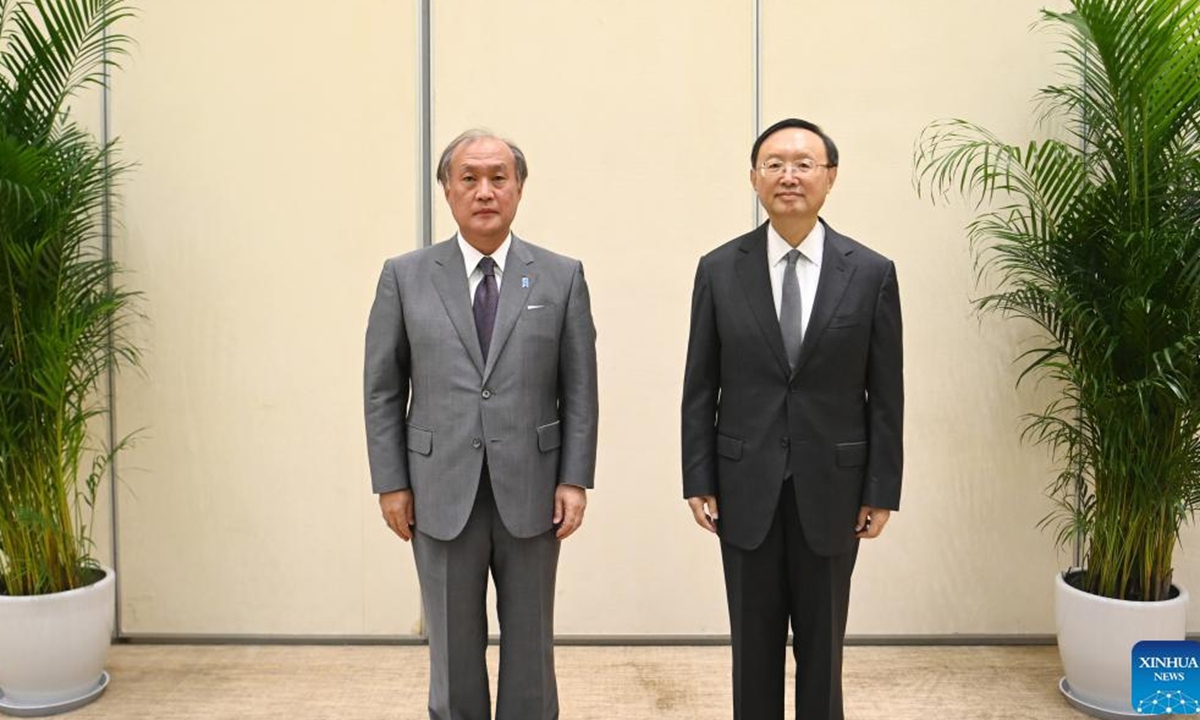 Yang Jiechi, a member of the Political Bureau of the CPC Central Committee and director of the Office of the Foreign Affairs Commission of the Communist Party of China Central Committee, co-chaired the ninth China-Japan high-level political dialogue with Takeo Akiba on Wednesday. , Secretary General of Japan’s National Security Secretariat in Tianjin. This is a high-level communication between China and Japan in a particular context. Time is special and it is of great importance. The last high-level political dialogue between the two countries dates back two and a half years.

During this period, China-Japan relations have seen many twists and turns, mainly due to the obvious negative changes in Japan’s China policy, especially some of its words and deeds on the Taiwan issue are wrong such as its recent performances before and after the United States Chamber. President Nancy Pelosi’s provocative visit to the island of Taiwan, which severely soured the Chinese public’s perception of Japan. The overall strategic mutual trust between China and Japan is rapidly declining. If the trend cannot be stopped in time, it will inevitably have a serious and destructive impact on bilateral relations and the regional situation. At the same time, facing a complicated global situation, the regional and global significance of China-Japan relations has become more prominent. This is why China insists that the two countries should “maintain a strong sense of responsibility and insist on their own beliefs.”

It was reported that Wednesday’s dialogue lasted about seven hours. Both parties agreed that the dialogue was frank, thorough and constructive, and a useful consensus was reached. They will continue the communication. The Chinese side stressed that the Taiwan issue is about the political foundation of China-Japan relations and the fundamental trust and good faith between the two countries. This point cannot be overstated. Japan should adopt a correct attitude towards China-Japan relations, keep its promises and curb the impulse to interfere in China’s internal affairs and challenge the foundations of bilateral relations. Otherwise, not only will it be impossible to hold talks, but China-Japan relations will also be at greater risk of further deterioration. The consequences will be unbearable for Japan.

Now, Japan always talks about “peace and stability in the Taiwan Strait”, forgetting that Japan itself bears a historical crime and responsibility regarding the Taiwan issue. Taiwan is part of China. Who else values ​​and strives to maintain peace and stability in the Strait more than China? There is no need for strangers to remind us of this. The facts are clear: “Taiwan independence” separatists and outside interference forces are the destroyers of peace and stability in the Taiwan Strait, and China will resolutely fight them with the confidence to win. . Japan cannot oppose safeguarding China’s national sovereignty and territorial integrity. To put it more seriously, in this case, Japan will become the enemy of the Chinese nation.

Objectively speaking, there has long been a mutual suspicion between China and Japan, which in recent years has been amplified and intensified by complex internal and external factors. Japan has developed a growing concern over China’s rapid development, which, while totally unnecessary in our view, is difficult for Japan to defuse. Such anxiety has made the country highly sensitive, almost neurotic, to China’s every move and often overreacts accordingly.

Meanwhile, neighboring countries are suspicious of Japan’s intentions because of its incomplete soul-searching on historical issues, its eagerness to “amend the constitution and expand the military”, and its “opening the way” to introduce US and Western military forces in the region and its active cooperation with them. At present, Japan tends to touch China’s core interests, which makes the Chinese people more vigilant. Voices like “an emergency in Taiwan is an emergency in Japan” sound really arrogant and ignorant to the Chinese people.

These questions reflect the importance of why China and Japan should strengthen their strategic communication. The Japanese side should consider the key positions of the Chinese side. In fact, China’s attitude has been consistent and clear, and there is nothing to hide. We hope the two countries can coexist peacefully and cooperate in a friendly manner, but we will not hesitate to retaliate against actions that harm our core interests. As long as Japan maintains a sincere attitude and plays its part, there is no need to engage in military expansion and war preparation using silver at a time when the economy is stagnating. An error in strategic judgment will only bring Japan huge risks and uncertainties.

Next month will mark the 50th anniversary of the normalization of diplomatic relations between China and Japan. After half a century of ups and downs, bilateral relations have accumulated fruitful results in areas such as economic and trade cooperation and people-to-people and cultural exchanges, which have brought substantial benefits to the peoples of the two countries. We know fate at 50. China-Japan relations should be more mature, stable, healthy and resilient. The two countries, especially the Japanese side, should use this important moment to have an in-depth reflection on China-Japan exchanges over the past 50 years, or even the past 2,000 years, to seek inspiration for development. future of relationships. As the Chinese side pointed out, the two sides should work together to build a China-Japan relationship that meets the requirements of the new era.