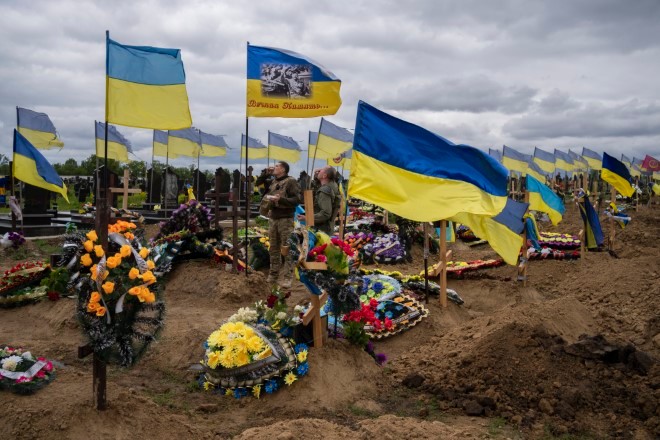 KYIV, Ukraine – Ukrainians dug in to defend the eastern city of Sievierodonetsk as it came under heavy shelling from Russian forces attempting to take the industrial zone known as Donbass.

In Tokyo on Monday, President Joe Biden, meeting with Japanese Prime Minister Fumio Kishida, thanked Japan for its strong leadership in resisting Russia as the two united in condemning Moscow’s invasion of Ukraine.

Earlier in his Asia trip, Biden signed legislation giving Ukraine an additional $40 billion in US support for its defense against the Russian attack.

As Russian and Ukrainian forces battled along a 551-kilometer (342-mile) corner of eastern Ukraine’s industrial heartland, Polish President Andrzej Duda visited Kyiv on Sunday to back aspirations of Ukraine to the European Union and addressed the Ukrainian parliament.

Duda received a standing ovation when he thanked lawmakers for letting him speak where “the heart of a free, independent and democratic Ukraine beat”.

Duda, a right-wing populist leader who clearly favored former US President Donald Trump over Biden in the 2020 election, nevertheless said that “kyiv is the place where it is clear that we need more America in Europe, both in the military and in this economic dimension.

Poland has become an important ally of Ukraine, hosting millions of Ukrainian refugees and becoming a gateway for Western humanitarian aid and weapons and a transit point for some foreign fighters who have volunteered to fight. Russian forces.

Zelenskyy urged the 27 EU members to speed up his country’s application for membership. It is to be discussed at a summit in Brussels at the end of June.

On the battlefield, fierce town-by-town fighting continued as Russian troops tried to expand territory that Moscow-backed separatists have held since 2014 in Donbass, which includes Luhansk and Donetsk.

Sievierodonetsk is the main city under Ukrainian control in the province of Luhansk, whose governor Serhii Haidai accused the Russians of having “simply intentionally tried to destroy the city…to engage in a scorched earth approach”.

Haidai said the Russians had occupied several towns and villages in Lugansk after 24-hour indiscriminate shelling and were concentrating forces and weapons there, bringing in troops from Kharkiv in the northwest, Mariupol in the south and from the interior. of Russia.

The only operating hospital in Sievierodonetck has only three doctors and supplies for 10 days, he said.

The Ukrainian military said Russian forces failed to attack Oleksandrivka, a village outside the city.

To strengthen its defenses, the Ukrainian parliament voted on Sunday to extend martial law and mobilize its armed forces for the third time, until August 23.

Ukrainian officials have said little since the war began about the extent of their country’s casualties, but Zelenskyy told a news conference on Sunday that 50 to 100 Ukrainian fighters were being killed, apparently every day, in the is.

In a morning report from the General Staff, Russia said it was preparing to resume its offensive on Sloviansk, a town in Donetsk province that saw heavy fighting last month after troops withdrew from Moscow from kyiv.

The conflict is not limited to eastern Ukraine. Powerful explosions were heard early Monday in Korosten, about 160 kilometers west of kyiv, the city’s deputy mayor said. It was the third consecutive day of apparent attacks in Zhytomyr district, Ukrainian news agencies reported.

Also on Monday, a Ukrainian court was due to deliver a verdict on the first Russian soldier to be tried for an alleged war crime. The 21-year-old sergeant, who admitted shooting a Ukrainian man in the head in the Sumy region on February 28, could face life in prison if convicted.

In other developments, the first lady of Ukraine, Olena Zelenska, gave a rare interview to the national television channel ICTV alongside her husband and said that she had hardly seen him since the start of the war.

“Our family, like all Ukrainian families, is separated now,” she said, adding that she spoke to him mainly by phone.

“Unfortunately, we can’t sit together, have dinner with the whole family, talk about everything,” she said.

Zelenskyy called the interview itself a “date on the air” and the couple, who have two children, joked in front of reporters.

“We are joking, but we are really waiting, like everyone else, to be reunited, like all the families in Ukraine who are separated now, waiting for their relatives and friends who want to be together again,” he said.

Elderly Japanese investors are suing Northstar (Bermuda) with law firm SSEK for up to $500,000 against Bankoh and Yoko Farias of Pacific Century Investment Services in Honolulu