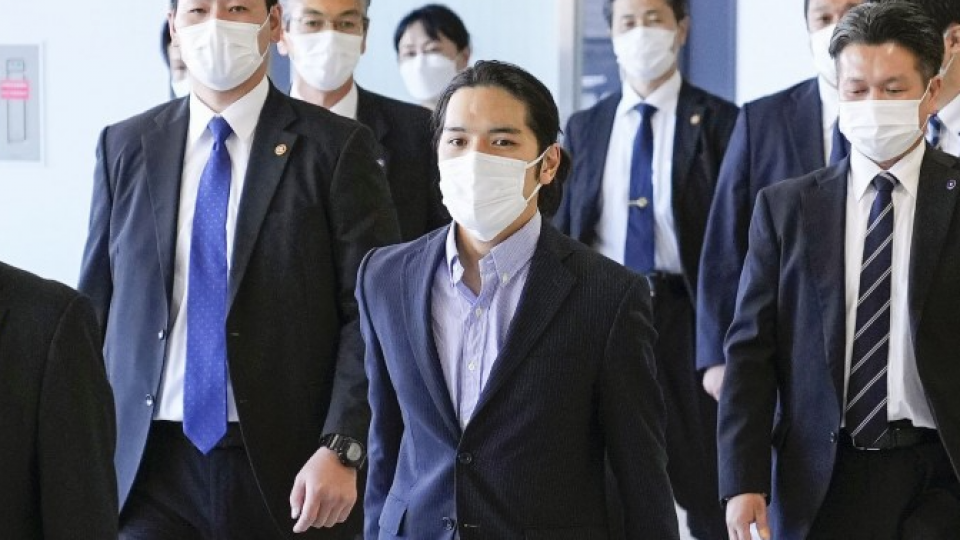 Princess Mako’s boyfriend Kei Komuro returned to Japan on Monday for the first time in about three years from the United States, where he lives, to prepare for their wedding amid controversy over a financial dispute involving her. mother.

Komuro, 29, is expected to hold a press conference with Emperor Naruhito’s niece after about two weeks of coronavirus quarantine and the two plan to register their marriage in October before starting a new life in the United States, where Komuro works at a law firm, sources familiar with the matter said.

Dressed in a suit without a tie and his long hair tied back in a ponytail, Komuro arrived at Narita Airport near Tokyo around 3:30 p.m. surrounded by security guards amid massive media attention.

Japanese Princess Mako’s boyfriend Kei Komuro (foreground right) arrives at Narita Airport near Tokyo on September 27, 2021, after a flight from New York. The couple are preparing to get married. (Kyodo) == Kyodo

Bowing to about 170 members of the waiting press, he drove through the airport in silence, before leaving around 5 p.m. in a black van dragged by numerous security vehicles.

He arrived at his mother’s home in Yokohama about two hours later in front of a crowd of reporters gathered outside his condominium, where he is expected to be quarantined for two weeks.

The couple’s wedding garnered a lot of public and media attention, with numerous Japanese tabloids and TV talk shows broadcasting details about Komuro and his family. His arrival was broadcast live on television.

Komuro left for New York in August 2018 to study at Fordham University Law School, where he obtained a Juris Doctor in May this year.

Their marriage was postponed for about three years following a series of media reports about a dispute between Komuro’s mother and a former fiance over 4 million yen ($ 36,000) in financial support, including the money spent on Komuro’s education.

In April, Komuro released a statement seeking to correct what he called misunderstandings among the public about his mother’s financial situation.

Shortly after releasing the statement, Komuro offered to make a payment to his mother’s ex-fiancé in an attempt to settle the financial dispute. But there has been no progress in the matter since then.

“If they love each other and want to get married, then I want to congratulate them,” a 43-year-old woman from Chiba prefecture, who was at Narita airport, said on Monday.

But another woman, 69, from Sapporo said Komuro “should make sure of responsibility before getting married,” referring to her family’s financial problems.

The Imperial Household agency plans to forgo the usual rites associated with weddings of members of the Imperial Family, such as an official engagement ceremony called “Nosai no Gi” and a “Choken no Gi” event to officially meet the emperor and empress before marriage.

While female members of the Imperial Family traditionally receive a lump sum payment of up to around 150 million yen upon leaving the household, the agency will likely accept Princess Mako’s unprecedented request not to receive such payment, government sources said.

Under current rules, female members of the Imperial family lose their royal status by marrying a commoner. The payment, which would be funded by taxpayers’ money, is intended to preserve the dignity of former royals.

If the money is not offered to Princess Mako, 29, the eldest daughter of Crown Prince Fumihito, it will be the first time in post-war history of Japan that a female member of the Imperial family will not receive such payment by marrying a commoner.

Since members of the Japanese Imperial Family do not have passports, the princess must first create a family register with Komuro as an ordinary citizen before applying for her passport.

After submitting legal documents to register the marriage, the princess is expected to move from her imperial residence to a condo in Tokyo while preparing for her new life in the United States.

Komuro and the princess met in 2012 as students at Tokyo International Christian University and unofficially engaged in September 2017.

Their wedding was originally scheduled to take place on November 4, 2018, but the agency announced in February of that year that they were postponing ritual ceremonies related to their marriage following reports of the financial dispute.

Princess Mako’s boyfriend returns from US to register marriage

Factbox-Latest information on the global spread of the coronavirus