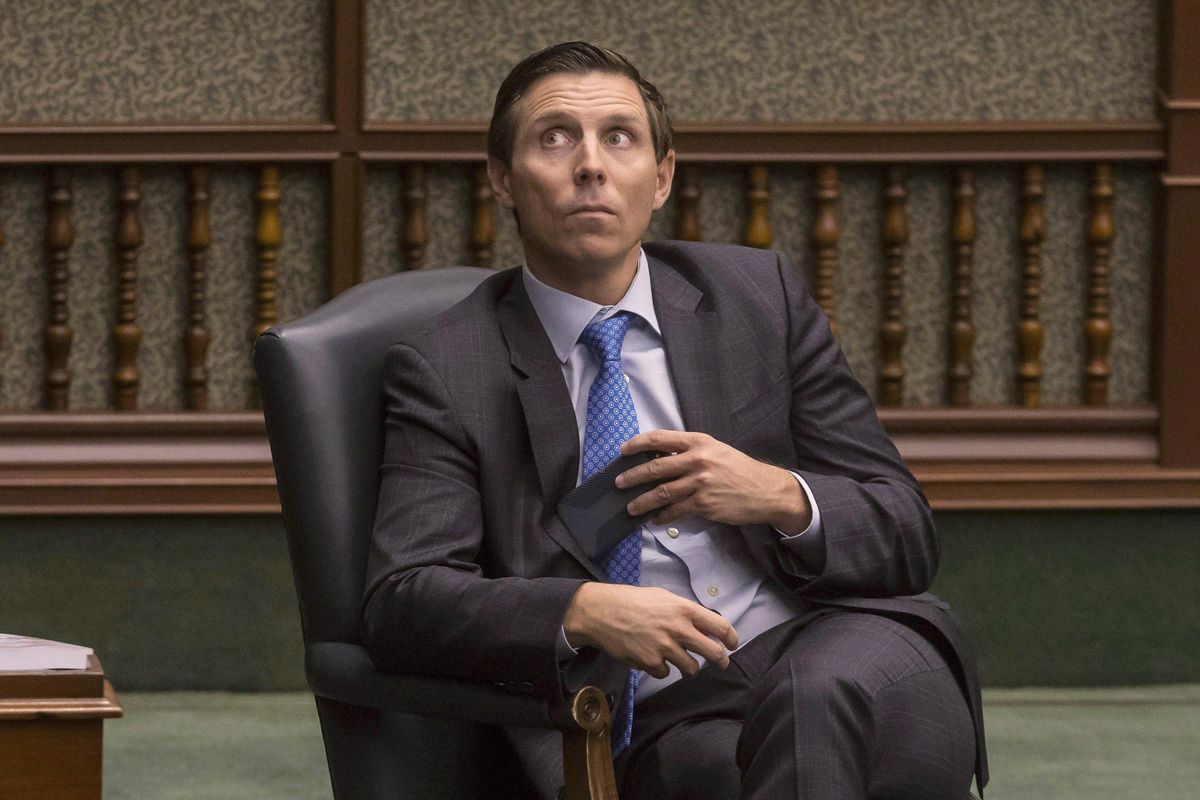 Patrick Brown, the former leader of the Ontario Progressive Conservatives, has settled a lawsuit with CTV News and says he is now set to decide whether he will run for the leadership of the federal Conservatives.

At issue is a 2018 article alleging sexual misconduct by Mr Brown, who quit as Progressive Conservative leader amid the resulting controversy.

Mr. Brown is now mayor of Brampton, the third-largest city in the Greater Toronto Area.

During his weekly press conference on Wednesday, he thanked his family for their support following the announcement of a settlement.

“I look to the future with optimism,” he said.

As for running for the leadership of the federal Conservatives, Brown said he will decide quickly whether or not to enter the race.

The Conservative Party has confirmed that the results of the leadership race will be announced by September 10. Potential candidates have until April 19 to register. Voters must be party members and they have until June 3 to get it.

If Mr Brown enters the race, he will join a group of competitors which includes MPs Pierre Poilievre and Leslyn Lewis. Former Quebec Premier Jean Charest is expected to enter the race on Thursday.

Roman Baber, a former Progressive Conservative member of the Ontario Legislative Assembly, was due to announce Wednesday that he would be running in the race.

There’s a Globe and Mail overview here on who’s running for the Conservative leadership, with candidates and dates to watch.

This is Politics Briefing’s daily newsletter, written by Ian Bailey. It is available exclusively to our digital subscribers. If you’re reading this on the web, subscribers may subscribe to the Policy newsletter and over 20 more on our newsletter sign-up page. Do you have any comments? Tell us what you think.

NEWS OF THE DAY

NO LIMIT OF UKRAINIAN REFUGEES WE WELCOME: SASKATCHEWAN – Saskatchewan says it will welcome as many Ukrainian refugees as the federal government is prepared to resettle in the province. History here.

WHERE DOES THE RUSSIA-UKRAINE CONFLICT LEAVE THE INTERNATIONAL SPACE STATION – For nearly a quarter of a century, the International Space Station has circled the globe unhindered by the political winds on Earth. But the orbital facility has never had to navigate a schism as severe as the one that now separates Russia from the rest of the station’s partners, including the United States, Canada, Japan and the 22 member nations of the European Space Agency. History here.

Please check here for live updates on the Russian-Ukrainian conflict.

NEW ONTARIO MASK MANDATE RULES – Ontario is lifting its mask mandate in most public places, including schools, and ending isolation requirements in most circumstances, even if people are not not vaccinated, the province’s chief medical officer of health announced Wednesday. History here.

CONCERNS ABOUT MANITOBA DEBATE ON WOMEN IN POLITICS – A Manitoba MP says some of her colleagues have spoiled what was supposed to be a respectful discussion about the accomplishments of women politicians. story here of Radio Canada.

TODAY IN THE COMMONS – The House of Commons does not sit until March. 21.

PREPARATION OF THE ARMED FORCES TO FACE THREATS AGAINST CANADA – The Standing Committee on National Defense held a meeting on Wednesday on the analysis of threats affecting Canada and the operational readiness of the Canadian Armed Forces to face these threats. The witnesses are Major-General Paul Prévost, Director of Staff, Strategic Joint Staff, Department of National Defence; Kevin Hamilton, director general of international security policy at the Department of Foreign Affairs; and, from Global Affairs Canada, Heidi Kutz, Senior Arctic Official and Director General, Arctic, Eurasion and European Affairs. More details including webcast information are here for the meeting that starts at 2:30 p.m. ET and ends at 4:30 p.m.

THE DECIBEL – In Wednesday’s edition of The Globe and Mail podcast, Dr. André Boozary – the executive director of social medicine and Population Health at the University Health Network in Toronto – discusses why homelessness is a policy failure – not an individual choice – and how he is working to address it. According to Statistics Canada, more … than 235,000 people are homeless every year, with 25,000 to 35,000 people going homeless every night. The decibel is there.

In Berlin, Prime Minister Justin Trudeau attended private meetings and then toured the Platform 17 Memorial. The Prime Minister met with German Chancellor Olaf Scholz, then held a press briefing with the Chancellor. Mr. Trudeau also delivered remarks and participated in a question-and-answer session with members of Atlantik-Brucke and the Munich Security Conference.

No scheduled schedule for other party leaders.

The Globe and Mail Editorial Board on how the world needs more Canadian oil and gas:The United States was happy enough to continue buying Russian oil until an invasion of Ukraine forced the taps to be turned off. Now the US is courting Saudi Arabia, Iran and Venezuela to fill the void. Hey, America, look north. In the hypothetical world of what could have been, Keystone XL oil could have flowed today. The pipeline was first boosted by Barack Obama in 2015. More than six years later, Europe and the United States suddenly realized why they had to shed their dependence on Russian fuel. As the world’s fifth largest gas producer, fourth largest oil producer and repository of the third largest oil reserves, Canada can help. Or at least it can help, if given years to ramp up. If Keystone XL had opened several years ago, oil companies might have increased production to match export capacity. But Canadian industry does not have a squirting faucet that it can turn on instantly.

Andrew Coyne (The Globe and Mail) on how we’ve already called Russian President Vladimir Putin’s bluff: “The best approach might be a strategy of gradualism, not ruling out a no-fly zone or ruling it out, but reserving the right to intervene in proportion to the severity of the situation on the ground. Mr. Putin’s position is weakening day by day. What may not be possible today could be in a week. In a nuclear poker game, it’s best to keep your cards close to your chest.

John Ibbitson (The Globe and Mail) why Canada should open its doors, without limits, to Ukrainians fleeing the war: “Canada is about to face a humanitarian challenge unprecedented in the history of this country. Thousands of Ukrainian refugees, mostly women and children, may soon seek asylum. They won’t want to be here and they won’t want to stay and, God willing, they will go home soon. But if the war in Ukraine goes badly, then they could be with us for a long time, maybe forever. The 1.4 million Ukrainian Canadians – the largest Ukrainian diaspora outside of Russia – are ready and willing to welcome this latest wave of newcomers. But they will need the help of federal and provincial governments and other Canadians. It is up to all of us to rise to the occasion.

Fen Hampson and Janice Gross Stein (contributed to The Globe and Mail) on how the West feels the pressure to act in Ukraine – but that would make things even more dangerous: “So far there is no evidence that Russian nuclear forces have taken steps to increase their readiness, and skeptics insist that Mr Putin and his colleagues are bluffing in order to deter NATO. But Russian military doctrine sets a lower threshold for the use of tactical weapons than NATO, in part because Russian forces are vastly outnumbered by NATO’s collective military manpower and firepower. Mr Putin knows he is outgunned and is frustrated that the invasion of Ukraine is proving to be a much tougher battle than he was led to believe, due to the extraordinary bravery of the Ukrainian fighters and the massive airlift of supplies by the United States. and its allies to Ukraine. If Mr. Putin is pushed into a corner, he may resort to the use of tactical nuclear weapons on the battlefield. It would break a long-standing taboo against the use of nuclear weapons anytime, anywhere, for any reason. And no Western leader is willing to risk calling Mr. Putin’s bluff that a war with Russia would be nuclear, because no one is more confident that he knows what he might do next.