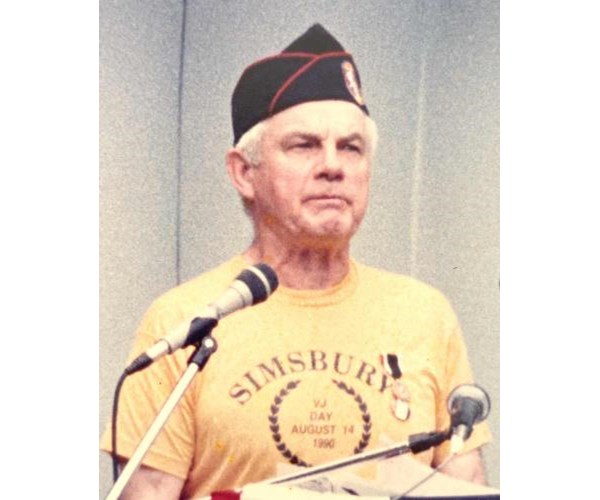 By Shirley R. Russ Last updated Sep 23, 2021
Share
Daniel W. Crowley, former prominent salesman for Northwestern Mutual Insurance, survivor of the Battles of Bataan and Corregidor and POW of Imperial Japan, passed away peacefully from natural causes on Thursday, September 16, 2021, at his home in Simsbury, Connecticut . He was 99 years old. He was born May 29, 1922 and raised in Greenwich, Connecticut. Son of famous women’s fashion icon, textile designer Timothy F. Crowley and Janet (Cook) Crowley, Dan experienced the depths of the Depression when his father’s business went bankrupt. He enlisted in the US Army Air Corps in October 1940 and was sent to the Philippines in March 1941. Mr. Crowley was posted to Nichols Field, which was destroyed when the Japanese attacked on December 8, 1941 and that the United States entered World War II. He fought in the Bataan Peninsula with the US Army’s Provisional Infantry Regiment, repelling three Japanese amphibious landings. After the surrender of the Bataan Peninsula on April 9, 1942 – the largest military surrender in American history – he swam the three miles of shark infested mine water to Corregidor Island in Manila Bay . On Corregidor, Mr. Crowley became a member of the 4th Marines fighting a dangerous and desperate coastal defense until the fall of the island fortress on May 6, 1942. After surviving a series of brutal working details over the Philippines , in 1944 he was sent aboard a hell ship to Japan. There he was a slave in copper mining, first for the Hitachi company, then for the Furukawa company in their Ashio mine. Mr. Crowley was released on September 4, 1945 and was at home in Connecticut for Christmas. He first became a traveling salesman dependent on commissions and his intelligence. In 1958 he started working for Northwestern Mutual Insurance, where he quickly became one of their top producers and a member of their Million Dollar club. Crowley believed he had a good life in Simsbury, but he never forgot the years that were stolen from him by the Japanese. In 2013, he helped have the Route 185 bridge in Simsbury named the “Bataan Corregidor Memorial Bridge” in memory of the soldiers who fought alongside him and lost their lives fighting the Japanese on Bataan and Corregidor. In October 2014, Mr. Crowley returned to Japan as part of the 5th US-Japanese POW Friendship Program. Unfortunately, the leaders of Furukawa refused to meet with him. However, he revisited one of the mines where he worked. In 2016, he attended President Barack Obama’s Veterans Day breakfast at the White House. And on January 4, 2021, at a ceremony at Bradley Air National Guard Base in Connecticut, U.S. Senator Richard Blumenthal presented Mr. Crowley with his long-delayed promotion to Sergeant, an honorary badge of infantryman. de combat (CIB) and a prisoner of war medal. . He was married for 65 years to Marie Boles who predeceased him in 2012. They had two children, son Daniel W. Crowley, Jr. (deceased) and daughter Janet Sackbauer of Vail, Colorado. On April 24, 2014, he married Kelley Thomen who accompanied him in 2016 to Washington for the White House breakfast on President Obama’s Veterans Day. Kelley and Janet were by his side when he died. Besides his wife and daughter, he is survived by his son-in-law Frederick Sackbauer and his grandchildren Lucy, Mary and Timothy Sackbauer, Daniel William Crowley III and his great-grandson Peyton Crowley. A public celebration of life will take place at a later date. Mr. Crowley was a life member of VFW, American Legion, and DAV, as well as the American Defenders of Bataan and the Corregidor Memorial Society. Donations must be made on behalf of Sgt Crowley to the American Defenders of Bataan and Corregidor Memorial Society; checks made payable to “ADBCMS” may be sent to the Company Treasurer, Ms. Judy Pruitt, 23 Elwell Road, Jamaica Plain, MA 02130, or to https://www.adbmemorialsociety.org/Memorial-Donations. The Carmon Funeral Home & Family Center of Avon is responsible for family arrangements. To share a memento or condolence message with Mr. Crowley’s family, please visit www.carmonfuneralhome.com.