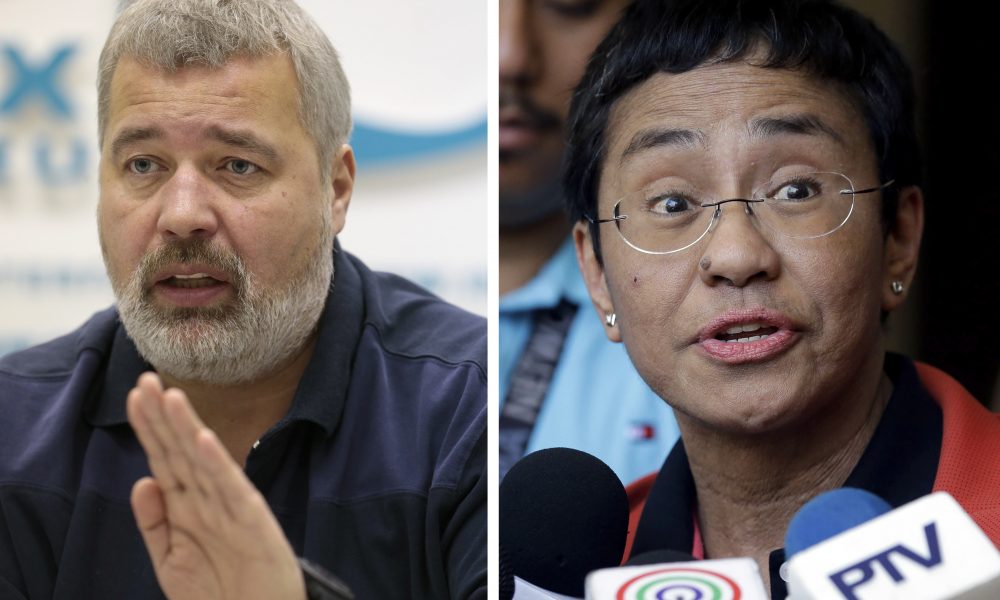 The Norwegian Nobel Committee awarded the Nobel Peace Prize 2021 Friday, October 8, to two journalists who had led a “courageous fight for freedom of expression in the Philippines and Russia”.

Maria Ressa from the Philippines and Dmitry Muratov from Russia were cited “for their efforts to safeguard freedom of expression, which is a prerequisite for democracy and lasting peace”.

Ressa is the founder and CEO of Rapper, a digital media company, while Muratov is one of the founders of the Novaja Gazeta (New Gazette) newspaper. Both media organizations are known for their independent and investigative journalism which has rocked institutions in their respective countries, leading to attacks on their organizations and individual journalists.

Both media outlets were founded by journalists.

Ressa and Muratov are the 7th and 8th journalists will receive the Nobel in the 120-year history of the award. Ressa is the first Filipino to win the award, while Muratov is the 32nd in Russia and the Soviet Union.

Berit Reiss-Andersen, president of the Norwegian Nobel Committee, said that the two laureates “are representatives of all journalists who defend this ideal in a world where democracy and freedom of the press face increasingly difficult conditions. unfavorable “.

“Rappler has focused critical attention on the Duterte regime’s controversial and murderous drug campaign. The death toll is so high that the campaign looks like a war waged against the country’s own people. Ms Ressa and Rappler documented how social media is used to spread fake news, harass opponents and manipulate public discourse, ”said the Nobel ad, read by Reiss-Andersen.

Ressa has been arrested multiple times in connection with a dozen cases against Rappler and his reporters, ranging from computer libel to tax evasion, filed after the organization won awards for its reporting and recognized by its tax district as an exceptional taxpayer company. .

Rappler is battling a government order to shut it down on suspected foreign ownership, citing philanthropic deposit receipts given by philanthropic investment firm Omidyar Network – a financial instrument licensed by the Philippine government and used by d ‘other media organizations and telecommunications companies in the country. . The government has found no fault in these other cases.

Novaya, meanwhile, is “the most independent newspaper in Russia today, with a fundamentally critical attitude towards power. The factual journalism and professional integrity of the newspaper have made it an important source of information on censurable aspects of Russian society rarely mentioned by other media, ”the committee said.

It was founded in 1993 by journalists from the longtime tabloid Komsomolskaya Pravda, using the cash prize of the 1990 Nobel Peace Prize winner Mikhail Gorbachev (Gorbachev now owns 10% of the newspaper. )

“Opponents of Novaja Gazeta have responded with harassment, threats, violence and murder. Since the launch of the newspaper, six of its journalists have been killed, including Anna Politkovskaja who wrote revealing articles on the war in Chechnya. Despite the murders and threats, editor-in-chief Muratov refused to abandon the newspaper’s independent policy, ”the committee said.

“To what extent does the price of journalists promote peace? The question was asked by a reporter during the press conference following the announcement in Norway.

“The Norwegian Nobel Committee is convinced that freedom of expression and freedom of information help to ensure an informed public. These rights are essential preconditions for democracy and protect against war and conflict. The award of the Nobel Peace Prize to Maria Ressa and Dmitry Muratov aims to underline the importance of protecting and defending these fundamental rights, ”the statement said.

“Without freedom of speech and freedom of the press, it will be difficult to successfully promote brotherhood among nations, disarmament and a better world order to be successful in our time. The award of the Nobel Peace Prize this year is therefore firmly anchored in the provisions of Alfred Nobel’s will.