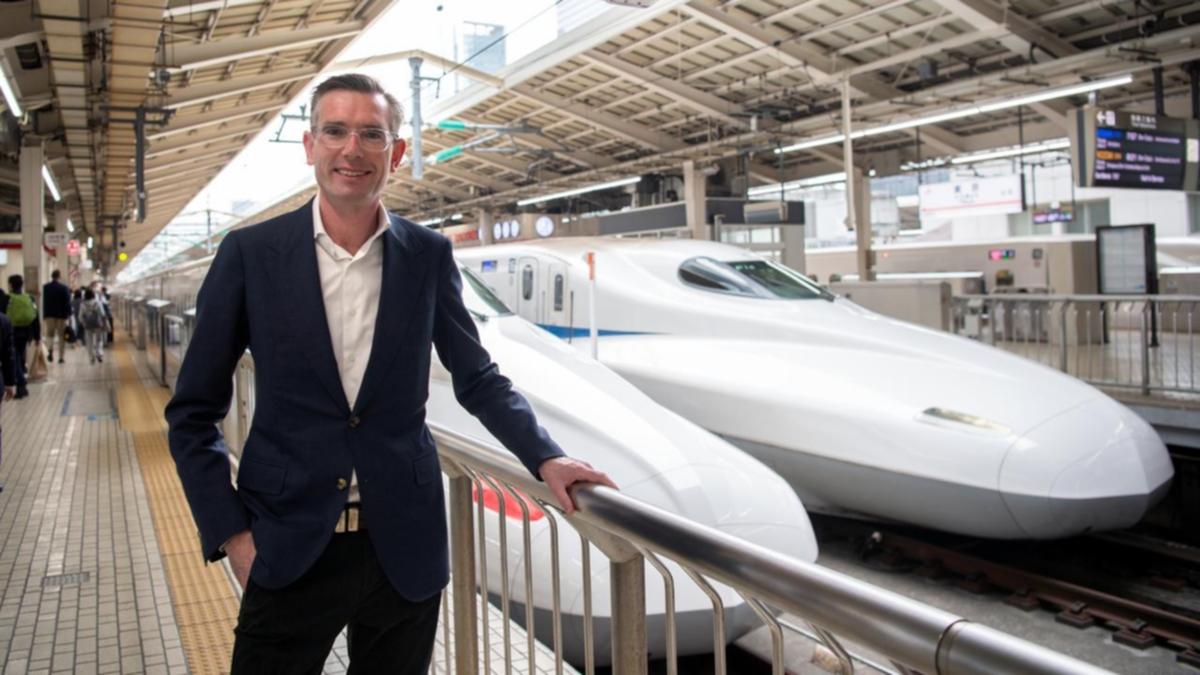 New South Wales Premier Dominic Perrottet took a trip on one of Japan’s iconic high-speed trains, which can reach speeds of up to 300 km/h, in a bid to accelerate his government’s vision of a faster train journey home.

Mr Perrotett, who is on a 10-day trade mission to Asia, traveled from Tokyo to Hiroshima on Saturday with Transport and Veterans Affairs Minister David Elliott and high school students from across the state who joined. on the journey to learn more about the horrors of the world. Second war.

The state government committed $500 million in the latest budget for a high-speed rail link between Newcastle and Sydney via the Central Coast, which the Prime Minister says shows its commitment to making faster rail a reality for NSW commuters.

“We focused on half a billion dollars, and the federal government … set aside the same amount … to improve the tracks, and improving the tracks means the trains travel faster,” Mr. Perrottet to journalists in front of the Hiroshima Peace Memorial. Museum.

“It’s important to plan for the future and dream about what travel might look like decades from now.

“But we are looking at ways to preserve the corridors and invest in the (rail) system we have in place becoming more efficient so that commuters can get from Sydney to the Central Coast more quickly.”

Torkel Patterson, a board member of the Central Japan Railway Company, which operates the country’s world-famous high-speed trains, told Mr Perrottet on Saturday how Australia’s east coast could benefit from an experience similar trip.

He suggested the route should be Newcastle-Parramatta-Baggerys Creek and over the national capital Canberra, with Melbourne as the final destination.

A stand-alone model bypassing other networks – as used by Japanese high-speed trains – would involve a tunnel through the terrain of about 870 km, Mr Patterson told AAP aboard the N700 Shinkansen train on Saturday.

Mr. Patterson suggested a joint 50-50 partnership between the federal government and the states to fund the costly project.

Mr Elliott was optimistic about the prospect of high-speed rail becoming a transport reality in NSW, but did not commit to a timetable.

“Will we see this type of rail transport in New South Wales in the future? Absolutely, we will,” he said.

“When you look at travel times, a dedicated corridor is the most attractive, but like everything we do in government, there will be a cost-benefit analysis.”

But talk of high-speed rail and faster commute times will continue to take a back seat as the government and commuters face new industrial action on the state’s rail network next week.

The NSW Rail, Tram and Bus Union has called for a four-hour shutdown from July 28, with action expected to have an impact in the hours before and after the tool failure.

The union and government remain at odds over a new company agreement as well as safety concerns over the new Korean-built intercity fleet, which is currently mothballed.

Mr. Perrottet was forceful on Saturday in refusing to commit to the $264 million earmarked for fleet safety modifications demanded by the unions without a company agreement first being reached.

“I’m not going to put in hundreds of millions of dollars to modify trains in perfect condition and then have a business agreement that won’t be finalized,” he said.

“As a result, the trains are not getting on the tracks and we continue to have industrial action in our state. This will not happen on my watch.”

US and Japan oust China as top agricultural export market