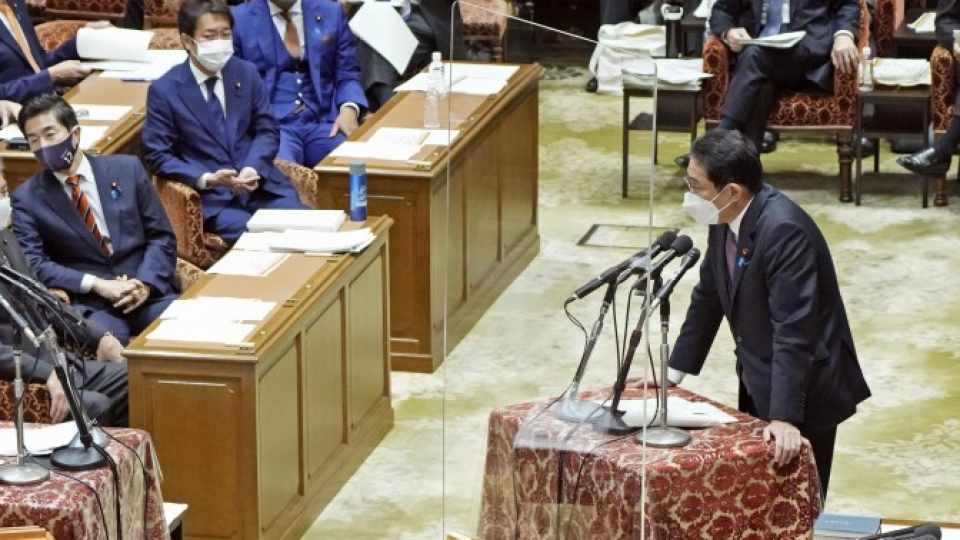 Japanese Prime Minister Fumio Kishida said on Tuesday that the government would seek a dissolution order for the Unification Church to be issued by a court, saying the controversial religious group may have been implicated in crimes.

Kishida’s administration on Monday moved to investigate the organization as it faces scrutiny for its ties to the ruling Liberal Democratic Party, while its questionable financial practices have caused consternation among families of his supporters.

Japanese Prime Minister Fumio Kishida (right) speaks during a session of the House of Representatives budget committee in Tokyo on October 18, 2022. (Kyodo) ==Kyodo

Kishida said he had instructed the culture minister to investigate the Unification Church, given that the government had received more than 1,700 consultation requests in 25 days since the establishment of a hotline on September 5. A court will assess whether a dissolution order should be issued. after the investigation.

Among the complaints, “there were criminal cases,” Kishida told a parliamentary session on Tuesday, adding that the Unification Church may have “violated various norms, including criminal law.”

Although the church cannot be prevented from operating in Japan under the dissolution order, it may lose administrative privileges.

The group has been in the spotlight since former Prime Minister Shinzo Abe was shot dead in July by a relative of a Unification Church member, who resented the organization and considered the Japanese prime minister the older as a supporter of it.

The investigation into the religious group will be implemented under a provision of the Religious Societies Act which grants authorities the “right to question” an organization.

The Unification Church has been the target of criticism mainly for its mass weddings and its “spiritual sales”, in which it pressures people to buy jars and other items at exorbitant prices. through the use of threats, such as invoking “ancestral karma” as a catalyst. for misfortune.

Depending on the outcome of the investigation and the judgment of a court, the Unification Church could lose its status as a religious society and be deprived of tax benefits, although it could continue to operate.

Keiko Nagaoka, Minister of Education, Culture, Sports, Science and Technology, said his ministry was eager to start the investigation as soon as possible, while Kishida said it was difficult to predict the duration of the investigation.

Kishida had previously been cautious before ordering an investigation into the Unification Church, founded by a staunch anti-Communist in South Korea in 1954 and often labeled a cult, in part because it feared violating the principle of religious freedom.

But he was forced to act against the religious group when links between members of his PLD and the Unification Church emerged, sparking public concern that the organization may have exerted political influence. .

File photo taken in September 2022 shows the name of the Family Federation for World Peace and Unification in a building housing the Unification Church in Tokyo. (Kyodo)

The issue played a role in Kishida’s Cabinet approval rating, which plunged to its lowest level since taking office in October 2021. The controversial decision to hold a state funeral for Abe on September 27 and the Inflation-linked price hikes without accompanying wage growth also proved damaging for Kishida.

In an apparent attempt to turn the tide of public support, Kishida vowed on Tuesday that his government would review consumer contract laws in a bid to help victims of the church, now officially known as the Federation of family for world peace and unification.

Kishida said his administration was ready to submit the related bills to the Diet from the current extraordinary parliamentary session until December 10.

So far, only two religious organizations have received a court disbandment order due to violations of the law in Japan.

One was the AUM Shinrikyo cult, which carried out the deadly 1995 sarin gas attack on the Tokyo subway, and the other was the Myokakuji temple group, based in Wakayama prefecture.

Priests from the Myokakuji Temple group defrauded people seeking help by telling them they were possessed by evil spirits before accusing them of exorcisms.

The government did not exercise the right to question members of the two religious organizations, as the groups were ordered to disband after their leaders were convicted in criminal cases.

Japan’s PM to investigate Unification Church amid backlash, first of such moves