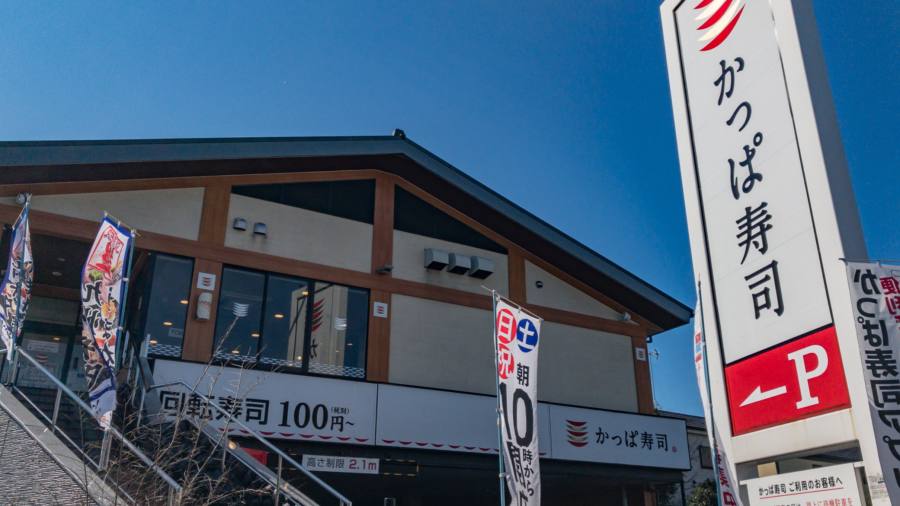 Shares of one of Japan’s ‘big four’ discount sushi chains tumbled on Monday as investors digested a scandal involving a jailed chief executive, industrial espionage, a weak yen and the price of fish .

Investors said the unexpected arrest last week and Monday’s resignation of Koki Tanabe, the chairman of Kappa Sushi operator Kappa Create, could upset the delicate balance between the country’s family-friendly conveyor belt sushi shops. Among the most competitive restaurant businesses in Japan, they sell individual plates of tuna, squid, or shrimp for ¥100 ($0.70).

Tanabe, who was a manager at arch-rival Hama Sushi, was arrested last week on suspicion of violating Japanese competition law after his former employer accused him of stealing fish price data .

After the market closed on Monday, Kappa said Tanabe offered to step down after his arrest and the council accepted his decision. “We would like to express our sincerest apologies for any inconvenience and concern this may have caused,” the company said.

Competition between the four biggest chains, of which Kappa pioneered but has since fallen to fourth place, is intense. Profits are highly dependent on obtaining the best prices for seafood and fish. That battle, people involved in the industry said, has escalated dramatically since March this year, as the yen fell to its lowest level in 24 years and the cost of imports soared. .

Kappa and third-largest sushi chain Hama are the last two major sushi chains to keep the industry’s ¥100 plates going after the yen and rising fuel prices forced rivals to raise prices this month -this.

Police arrested Tanabe on Friday for allegedly violating the Unfair Competition Prevention Act, according to Kappa. He joined Kappa Create from Hama in 2020 and became its president the following year. Tanabe could not be reached for comment. But he said the information he got was “not a big deal”, according to local media citing law enforcement sources.

On Monday, Kappa said Tokyo police had passed the case on to prosecutors.

In a separate statement, Zensho, a parent of Hama, without naming Tanabe, said they discovered that “the former manager of Hama Sushi” had illegally obtained information on the cost of products related to the group’s seafood purchases. The company had already filed a criminal complaint with Tokyo police against Tanabe last year, prompting police to raid Kappa’s headquarters in Yokohama, near Tokyo.

Information on rivals’ buying prices for fish and other seafood could be useful for Kappa to reduce the cost of sourcing seafood when negotiating with suppliers. But echoing reported comments from Tanabe, an investor in the sector said fish prices change frequently and data could quickly become outdated.

A person who worked closely with the management of another of the Big Four sushi chains said Hama seemed motivated by “a pure desire to cause trouble for a rival” as the value of old pricing data was “approximately nothing”.

The battle over data follows turbulent years at Kappa, which has struggled to develop a long-term strategy due to frequent changes in ownership and management over the past eight years.

Since 2011, the discount sushi market has grown 60% with sales of 740 billion yen in 2021, boosted by takeout sales during the pandemic, according to a report by research firm Teikoku Databank.

But it was inevitable that the industry would face “significant cost increases,” according to the report, warning that ¥100 sushi plates could soon disappear.