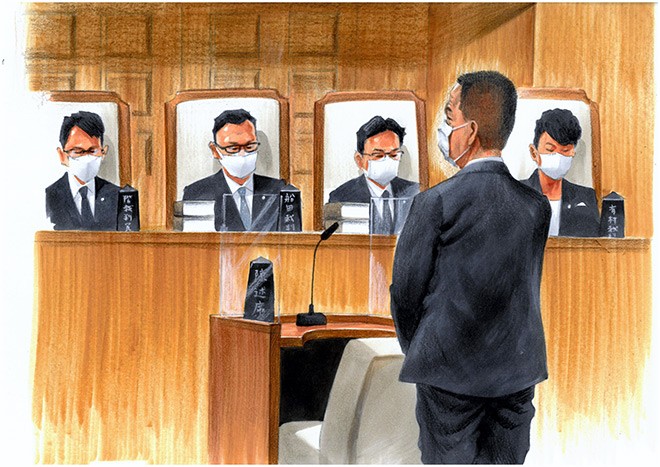 A highly unusual impeachment of a suspended High Court judge began on March 2 over “offensive” tweets, but legal experts have said his actions are unlikely to lead to his dismissal.

The “crime” committed by Okaguchi was posting messages on social media that offended some people.

Okaguchi appeared before the arraignment judge and apologized for the messages in his opening statement.

“I sincerely apologize for the inappropriateness of the acts of expression that I carried out,” he said.

But his lawyers later argued that while the posts may have been inappropriate, Okaguchi never intended to disparage anyone.

The judges’ arraignment committee found 13 tweets and statements made at press conferences by Okaguchi as acts seriously undermining a judge’s dignity.

Takatsugu Tsuchiya, a constitutional law professor at Kindai University, doubted such comments would be enough to remove Okaguchi as a judge.

“It will be difficult to make a decision about something he did as an individual on social media,” Tsuchiya said. “Judges also have freedom of speech, so I have doubts about his removal.

“At the same time, the recent social trend is to strictly deal with human rights violations caused by social media posts, so there will probably be a discrepancy between who decides the case,” said Tsuchiya.

Okaguchi has been tweeting under his real name since 2008. Initially, he often sided with people in weaker positions in society, such as victims of hate speech.

But he has also been sanctioned by the courts for a number of social media posts, including one in December 2017 about a high school girl who was murdered. He also got in trouble for an article in May 2018 about owning a pet dog.

In November 2019, Okaguchi was tipped off for a message to the bereaved family members of the murder victim, who later filed for impeachment, saying they were deeply hurt by his comments.

The Court of Impeachment of Judges will be open to the public and 14 members of the Diet will hear the case. A two-thirds majority of those members will be required to remove Okaguchi from office.

Okaguchi would have no avenue of appeal if fired, and he would automatically lose his certification to work in the legal industry.

But in the first session, Okaguchi’s lawyers pointed out that the three-year statute of limitations had already expired for four of the 13 posts found to be offensive.

How the pandemic gave Japanese workers a break