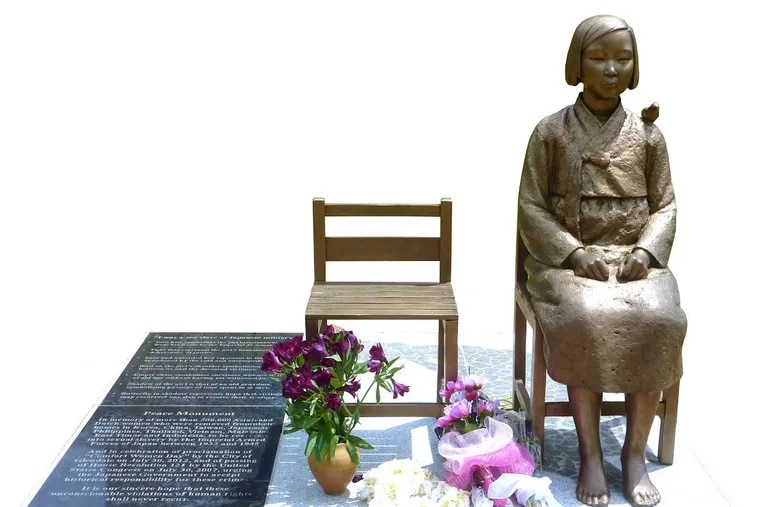 For its Korean American supporters, the statue would pay welcome attention to one of the lesser known atrocities of World War II – how Korean women were detained and raped by the Japanese military during World War II.

But for some members of the Japanese-American community in the Philadelphia area, the proposed monument would only fuel anti-Asian hatred and even violence.

These differing views are at the heart of a simmering dispute in which defenders of two of the region’s Asian communities and others have clashed in an at times bitter dispute.

The fight is being waged over a proposal before the city’s Arts Commission calling for the installation of a bronze statue in a landscaped plaza off Front Street near Catharine Street in Queen Village. The artwork, the replica of a model placed in 35 countries to date, shows a mournful-looking young woman sitting in a chair with an empty chair beside her. A bird landed on his shoulder. The bird is said to symbolize freedom and peace; the empty chair signifies the need for dialogue on war crimes.

Many women died during the war. Others kept silent for decades until survivors began speaking out 30 years ago. While Japan has issued a series of apologies and set up a reparations fund in 2015, resentment over this tragic history remains deep between the two countries, fueled in part by comments from some Japanese leaders downplaying responsibility.

Philadelphian Shinjoo Cho, the musician and former city business worker who led the campaign for the statue, told a public hearing that a ‘failure to face the past will not bring peace to generations. future”. She and her group, which is part of the Korean American Association of Greater Philadelphia, call the monument “The Statue of Peace.”

“Our desire is for this project to contribute and join the movement for gender and racial equity,” Cho said. “We don’t ignore victims or their voices because of our preference to avoid discomfort or have difficult conversations. We believe this space and the artwork will really help us get there together.

Critics say the statue will deepen divisions, not heal them. They say that by accepting it, Philadelphia would be taking sides in an ongoing dispute between Korea and Japan more than 75 years after the end of World War II. They also say the monument would violate the city’s official guideline governing public art, which limits statues to those that recognize people or events who “have made a significant contribution to Philadelphia and beyond.”

Makoto Funaki, the medical scientist who is president of the Japan Association of Greater Philadelphia, said the monument could stir up violence.

“Our main concern is that the Comfort Women statue will incite more anti-Asian harassment, violence and acrimony, especially against Japanese Americans and other Japanese people,” Funaki said last week. in an email. “It has been a source of hatred, violence and harassment in South Korea and we don’t want that here in Philadelphia.”

Funaki was in Japan last week and was unavailable for an interview. Cho was also out of the country, but spoke at length during the hearing.

The fate of the statue is expected to be decided soon by a vote of the nine-member art commission.

The debate comes after two years of scrutiny of the city’s statues. Last year, a city judge reprimanded Mayor Jim Kenney for his plan to remove a statue of Christopher Columbus that sits deeper in South Philadelphia, saying the mayor violated the rules of the directive on deletions. Kenney, who called Columbus a brutal slaver in an official statement, appealed the opinion. The statue remains in place, but boxed and out of sight. In 2020, Kenney also removed the statue of former Mayor Frank L. Rizzo across from City Hall.

The “comfort women” statue was erected for the first time in 2011 in Seoul, the South Korean capital, in front of the Japanese embassy. There it became a gathering place for dueling protest groups disagreeing over Japan’s wartime record.

The monument has sparked controversy elsewhere and even opposition from the Japanese government. In 2017, Japan filed a friend of the court brief with the United States Supreme Court supporting a bid to remove a statue in Glendale, California, the first erected in the United States. His memoir said Glendale had sought to “disrupt United States foreign policy” by encouraging good relations between Japan and South Korea.

The Supreme Court declined to hear the case. A Glendale spokesperson said the statue was a silent presence and sometimes served as a backdrop for peaceful events.

The following year, Osaka severed its “sister city” relationship with San Francisco over the location of a similar statue in the city by the bay.

In Philadelphia, supporters quickly garnered support or at least non-opposition. In early 2018, the Queen Village Neighbors Association officially advised the town that they would not object.

An early supporter was city council member Helen Gym, one of two Korean Americans on the body. “This statue is meant to increase our understanding of what happened to Korean comfort women and the horrors of war and to honor the struggle of women who experience violence and sexual abuse,” Gym said last week.

City Council Member Mark F. Squilla, whose district includes the location of the proposed statue, also officially endorsed it. “I fully support this request,” he wrote in 2018.

While Gym held their position, Squilla backtracked. His chief of staff said last week that Squilla would accept the Arts Commission’s final vote. “Whatever they decide is good for us,” she said, adding, “We had no idea it was going to become such a controversial topic.”

A spokesman for council member David Oh, the council’s other Korean-born official, said Oh took no position on the statue. “He thinks it has to go through the process to see if the community supports it,” the aide said on Friday.

Last year, the Art Commission, in a preliminary vote, voted 6-0 to approve the concept for the statue.

At a public hearing earlier this year, arts officials from the Kenney administration also spoke favorably of the statue. The Office of Arts, Culture and Creative Economy has posted a Q&A on its website, refuting criticism of the monument. It was published in five languages ​​- English, Korean, Japanese, and Traditional and Simplified Chinese.

During the hearing, Marguerite Anglin, the architect and painter who is the city’s director of public art, dismissed the idea that the statue went against the directive’s apparent focus on business. of Philadelphia. She noted that it was not far from the Penn’s Landing memorials honoring veterans of the Korean and Vietnam wars.

The work, she said, “represents Asian communities that have a significant impact on Philadelphia but are not well represented in the city’s public art collection.”

Anglin added: “A work of art can have political themes. Public art can be controversial, but it can allow people to have a space to discuss difficult topics.

His boss, the mayor, is more cautious.

“It is clear that the Statue of Peace has generated strong opinions and debate, as art often does,” a spokesperson for Kenney said last week. “All such notices will be considered before the Art Commission and the mayor will not lobby for or against the work before that body.”

In March, Arthur Gibbs, the commandant of a Veterans of Foreign Wars post on Front Street across from the proposed plaza, wrote the city in opposition to the statue. While saying “I don’t discount the issue”, Gibbs said he saw no particular reason why Queen Village was chosen as the site. Gibbs said he feared the monument could become a rallying point for protests that could upset some of its members.

In June, opponents of the statue gained another ally when leaders of the American Jewish Committee wrote to the city recommending against the monument.

“We don’t think the statue would move us in the direction of a spirit of reconciliation,” AJC regional director Marcia Bronstein said in an interview last week. “We think it would be divisive and create conflict.”

As an example of a different approach, Bronstein said the American Jewish Congress pushed immediately after World War II to take steps to rebuild a leveled Germany, at a time when many Jewish groups wanted it avoided. for his war crimes. She saw this as a gesture of reconciliation, not as an accentuation of divisions.

Bronstein said his group works with Asian leaders and spoke out against hatred directed at Asian Americans.

Next month, the city’s arts commission is expected to hold a hearing and then vote. No date has been set. The members, paid $40 per hearing, must hold a special sitting on the statue.