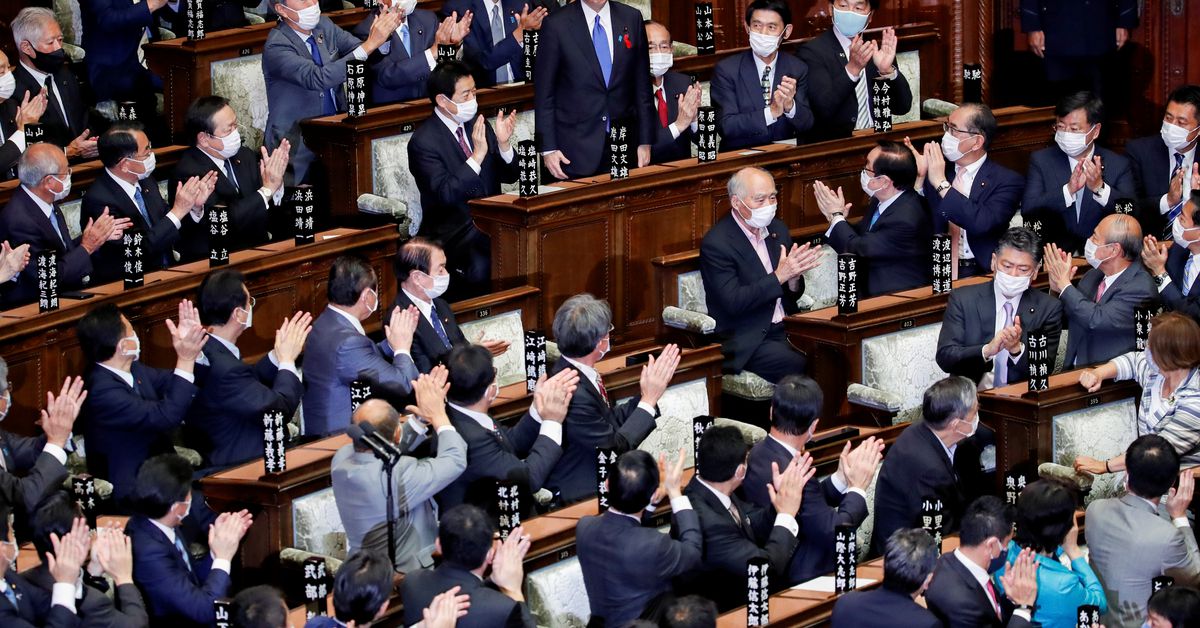 Newly elected Japanese Prime Minister Fumio Kishida is applauded after being chosen as the new Prime Minister at the Lower House of Parliament in Tokyo, Japan on October 4, 2021. REUTERS / Kim Kyung-Hoon

The ruling Liberal Democratic Party (LDP) and its junior coalition partner currently hold a majority of nearly two-thirds of the House’s 465 seats, and Kishida hopes they will retain a majority.

Here are the highlights on the major political parties in Japan.

Number of seats in the Lower House currently occupied: 274

The PLD has maintained close ties with business and bureaucracy and has been in power almost continuously since its formation, apart from a three-year hiatus between 2009-2012.

Under Shinzo Abe’s leadership, the PLD regained its status as a governing party in 2012.

While pursuing economic growth, Kishida has made closing the wealth gap part of his agenda.

The LDP proposes to revise the pacifist constitution drafted by the United States in four areas, notably by enshrining the role of the Self-Defense Forces.

Despite all the lingering anxiety over nuclear power plants since the Fukushima disaster in 2011, Kishida believes nuclear power should remain an option for Japan to ensure stable and affordable electricity.

Number of seats in the Lower House currently occupied: 29

The Komeito, founded by members of the Soka Gakkai Buddhist sect, was a junior partner of the LDP-led governments for 10 years until the ruling alliance was defeated in the 2009 election. But it returned to power with the PLD during the December 2012 elections.

The Komeito is more moderate on security issues than the LDP. In terms of economic policy, the party seeks to defend the interests of the less well-off citizens. Last year, Komeito continued a program to donate 100,000 yen ($ 896) per citizen to help them cope with the pandemic.

Number of seats in the Lower House currently occupied: 110

The center-left CDPJ is the largest opposition party in Japan. Although it was only formed last year, the roots of the CDPJ lie in the Democratic Party of Japan, which succeeded in defeating the LDP-Komeito alliance in 2009, and held power for three years. .

The party advocates halving the sales tax to 5% temporarily, to cushion the blow of the pandemic.

Its policies on climate change are more ambitious than those of the PLD. The CDPJ has set itself a target of reducing greenhouse gas emissions by 55% or more from 2013 levels by 2030, compared to the government’s target of a 46% reduction.

A daily Asahi poll showed Wednesday that 13% of those polled plan to vote for the CDPJ in the next election, far behind the LDP’s 41%.

Starting with a history of nearly a century, the JCP calls for doubling the number of hospital beds for patients with infectious diseases in order to better fight the pandemic, and to make the rich and big companies support a plus. large share of the tax burden.

The PIJ calls for deregulation, tax cuts and decentralization of power to help spark growth. He favors constitutional revisions and was seen as a possible ally for the LDP’s push to revise the charter.

DEMOCRATIC PARTY FOR THE PEOPLE (DPFP)

Number of seats in the Lower House currently occupied: 8

The party is calling for a stimulus package worth 50 trillion yen to support those affected by the coronavirus pandemic. He sees nuclear power as an important option for Japan, until alternative energy sources are firmly established.

Among the other small parties, one of the most interesting is the regional Tokyo Citizens First party, formed by Tokyo Governor Yuriko Koike. He said earlier this month he would start a national party and contest the lower house elections.