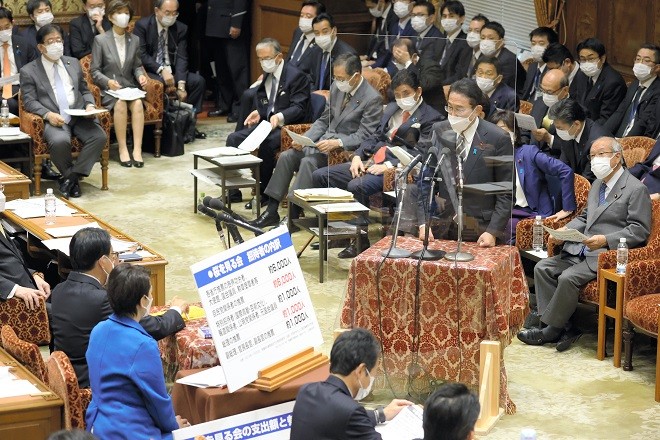 EDITORIAL: The diet will have its hands full after the end of year vacation

The special Diet session that ended on December 21 provided the first opportunity for ruling and opposition parties to come together since the Lower House elections in October.

During the session, the ruling Liberal Democratic Party and its junior coalition partner Komeito used their majority to pass a draft supplementary budget for fiscal 2021 worth 35.9 trillion yen (320 billion yen dollars).

However, the budget plan itself leaves a lot to be desired since 60% of the funding relies on debt in the form of bond issuance. It also includes projects that have nothing to do with urgent measures to respond to the COVID-19 pandemic.

Since the session only lasted 16 days, many outstanding issues were put aside.

The restoration of the Diet’s function as a â€œcitadel of discourse,â€ a concept marginalized under the administrations of Shinzo Abe and Yoshihide Suga, is slowly taking root. The true value of the diet will be tested during the next regular session which should start early next month.

An outstanding issue suspended due to timing issues between the ruling and opposition camps concerned is to revise a monthly allowance of 1 million yen paid to each lawmaker to cover transportation, communication and accommodation costs. miscellaneous, or “buntsu-hi” for short.

Both camps agree on the need for a legal review to put payments on a daily basis and eliminate the absurdity of lawmakers getting the full monthly amount for a single day’s work.

Allocations are referred to as a â€œsecond walletâ€ that politicians can effectively draw freely from, as there is no requirement to disclose how the money is spent.

Transparency in the flow of political funds is crucial for public confidence in politics. But by failing to even determine how the buntsu-hi is spent, the Diet has further diminished its credibility.

The ruling coalition’s decision appeared as a desperate attempt to protect the privileges of politicians.

Prime Minister Fumio Kishida exacerbated the problem by pretending it was not his problem even though he had pledged to “ensure transparency in the movement of political funds” during his LDP presidential election campaign.

We urge Kishida to assert his leadership as party chairman by calling for disclosure before the regular Diet session begins next month.

During the special session, more details emerged of how officials from the Ministry of Land, Infrastructure, Transport and Tourism manipulated the core statistics used by the government for important economic indicators.

Kishida promised to establish a third-party investigative committee and publish the results within a month. This was in response to questions from members of the ruling party and the opposition about the background to the scandal, the ministry’s motivations and how it intends to regain the government’s lost credibility.

The Diet must keep this in mind during the next ordinary session in order to examine the issue in depth and get to the bottom of this scandal.

In a lawsuit brought against the government by the widow of an official of the Kinki Financial Bureau of the Ministry of Finance who committed suicide after being forced to falsify official documents relating to the Moritomo Gakuen scandal, the government effectively “admitted the correctness â€of the plaintiff’s case by offering to pay him approximately 107 million yen in damages.

Lawyers for the plaintiff denounced the government for shutting down the case to prevent the truth from coming out.

Kishida, however, contented himself with repeating to the Diet that he “would continue to live up to his responsibility for good”, and rejected the opposition camp’s request to call on the parties concerned to testify to the Diet, claiming that it was “something for the Diet to decide.”

The special session was also affected by the efforts of the main opposition party, the CDP, to be seen as a party that prioritizes policy making. This resulted in lackluster questions and answers regarding the â€œnegative legacyâ€ of the Abe and Suga administrations.

It is also a serious matter which is postponed to the ordinary session of the Diet.

The geopolitical consequences of the EU’s green ambitions