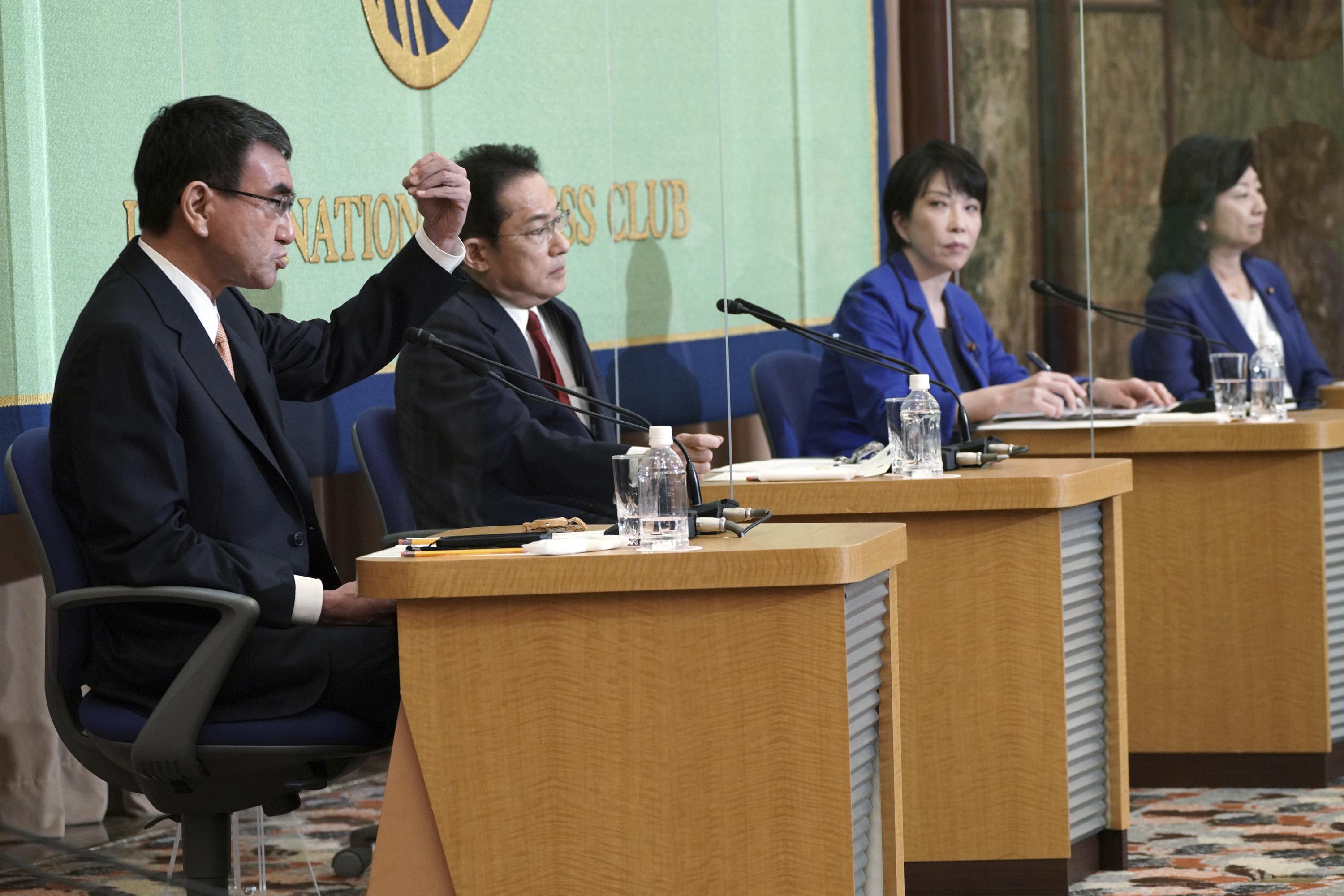 The vote will take place on September 29.

Here’s a look at some of the candidates’ views on key political issues debated at the Japan National Press Club in Tokyo:

Kono, who served as foreign and defense ministers, said a possible conflict cannot be ruled out amid growing China’s assertion in the region and growing tensions over Taiwan, an autonomous island. which China regards as its renegade province to be annexed by force if necessary. . He said Japan wanted to use its security alliance with the United States and its partnerships with Europe and other democracies to prevent Beijing from taking military action. He said that the relationship between Japan and China is also about the economy and the exchange of people which requires “strict diplomacy”.

Kishida said “summits and high-level dialogues are essential” for a peaceful settlement of the Taiwan issue and plans to work with like-minded countries to counter Beijing’s “authoritarian approach”.

Takaichi, an anti-Chinese hawk who shares the nationalist views and historic revisionism of former leader Shinzo Abe, has offered to compile a worst-case contingency plan for a possible China-Taiwan conflict.

Noda said Japan is a regional hub for Taiwan’s stability and US-China tensions over trade, technology and human rights. She said Japan should pursue “pacifist” diplomacy based on lessons learned from its defeat in World War II.

Kishida, as the former foreign minister, urged Seoul to take the first step to resolve a dispute resulting from South Korean court rulings that ordered Japanese companies to pay compensation to Korean workers during wartime.

Regarding North Korea, Kishida said he would coordinate with President Joe Biden on measures to denuclearize the Korean Peninsula, while seeking other avenues, including talks with the North Korean leader, to resolve the issue of Japanese citizens kidnapped in the North decades ago.

Kono said he would step up missile deterrence and intelligence gathering as part of the Japan-US security alliance. He too would like a summit with Kim Jong Un to resolve the kidnapping issue, a major obstacle between the two countries without diplomatic relations.

Kono has said that conserving energy, reducing fossil fuels and boosting renewable energies are its main strategy to achieve carbon neutrality by 2050. If this is not enough, the safe restart of nuclear reactors is inevitable, he said. Kono said the nuclear industry did not have much of a future and supported the phase-out of nuclear power plants. He opposes Japan’s insistence on nuclear fuel cycles that involve reprocessing of spent fuel – the main cause of Japan’s plutonium stockpile.

Kishida supported fuel recycling as a way to delay a repository, but Kono said the disposal of massive radioactive waste “is an issue that whoever becomes prime minister must tackle.”

Takaichi proposed underground compact fusion reactors as a safer and more environmental option. Noda believes in the production of geothermal power, as well as other renewable energies such as hydrogen and offshore wind power as part of the ongoing 20 trillion yen (180 billion yen dollars) over the next decade.

Kono said that Abe’s “Abenomics” policy only benefits large companies but has failed to increase revenues, and that he will tackle the problem by offering tax incentives to companies that raise wages. .

Kishida said he would introduce (asterisk) a new growth and distribution capitalism (asterisk) to reduce the disparities caused by Abe’s approach and made worse by the pandemic.

As Minister of Immunizations, Kono proposed the use of digital technology to monitor the conditions of recovering COVID-19 patients at home, while introducing rapid test kits for early detection and isolation of patients.

Kishida has proposed a hefty economic package to stabilize the healthcare system, while calling for strict social distancing and other measures.

Takaichi called for nationally developed COVID-19 vaccines and treatment, and a possible legal change to allow strict lockdowns in the event of a future pandemic.

Noda has proposed a nationwide facility of sub-hospitals that provide supplemental oxygen infusions and antibody cocktails for less severe patients, and financial support for those affected by loss of income or d employment, especially women.