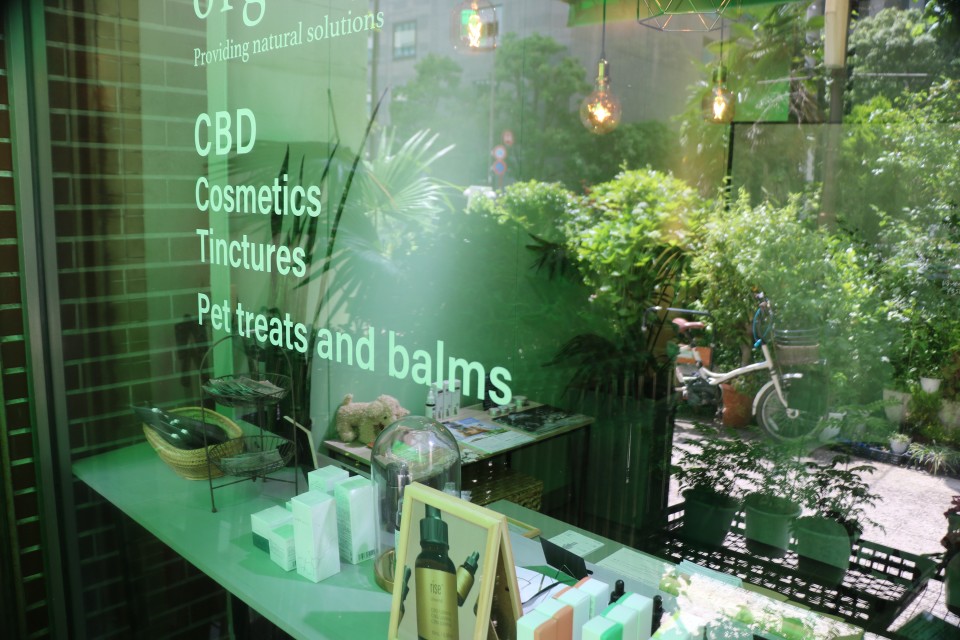 From ingestible oils and gums to skin lotions and makeup, products made with cannabidiol, an extract from the cannabis plant that lacks its psychoactive properties, are rapidly gaining popularity in Japan.

CBD, as cannabidiol is commonly known, is said to have many health benefits, such as helping to treat stress and anxiety and possessing anti-inflammatory properties. CBD items are now readily available in stores in cities across the country, while trials of a British-made CBD drug also began this year.

Uehara first heard of CBD in early 2020 after it was recommended to him by the supplier who supplied the café with its namesake hammocks. “I was struggling with insomnia at the time,” Uehara said.

He started eating CBD gummies, and after just a few days, Uehara said he was sleeping better. “I couldn’t sleep more than two or three hours, but then it went to six or seven hours.”

Uehara now sells CBD oils and gummies at the cafe, and says some customers come specifically to buy the products. “We were asked if it was really legal before,” he said. “But other customers are comfortable and believe it’s okay because it’s just another product sold in the cafe.”

But as the CBD industry grows, possession of the plant from which it is derived remains highly illegal in Japan, stemming from a law enacted in 1948 criminalizing cannabis after the end of World War II and the American occupation. who followed.

In fact, hemp has been used since ancient times for items such as the sacred Japanese “shimenawa” rope at shrines, with some farmers still allowed to grow the plant.

Although recreational cannabis use is far from widespread in Japan, a record 5,783 offenses involving the drug were documented last year. Health, Labor and Welfare Minister Shigeyuki Goto said the government will “strengthen the crackdown and promote comprehensive measures” against drug addiction.

On the other hand, a CBD-based drug called Epidiolex has become the first of its kind to be tested in the country for patients with rare and severe forms of epilepsy, and with the strong support of patient associations, the ministry of Health plans to revise the Cannabis Control Act to make room for the drug.

Some are also calling for CBD products and potential drugs containing tetrahydrocannabinol, also known as THC, to be made available in Japan. The constituent is responsible for the psychoactive properties of cannabis that make people feel “high”.

CBD is allowed in Japan because products derived from the stems and seeds of cannabis are not criminalized, according to the law, unlike those made from concentrated extracts in other parts of the plant, such as THC.

“The problem is determining how much THC (in a product) is acceptable,” Tomohiko Mizuno, representative director of the Association of Japan Cannabinoid, which supports the cannabis law review, said in a statement. recent interview with Kyodo News.

Former lawmaker Mizuno, 66, says Japan ‘doesn’t allow values ​​other than zero’ and thinks it should set legal standards for THC content from a ‘rational point of view, as of other countries have established it”.

Mizuno, a member of Japan’s House of Representatives until 2012, first discovered CBD in 2014. Also a trained dentist, he became interested in the medicinal properties of CBD and the benefits they could have for people. people of aging Japanese society.

In addition to campaigning for the review of the Cannabis Act, the association offers counseling services to new businesses learning to navigate the industry and conducts inspections on imported products while providing certifications that they can be marketed legally.

Hirotsugu Suzuki, 49, knows from experience how difficult it can be to run such a business, having founded his company Organy Inc. in 2015 and creating the first CBD skincare line in Japan.

“There were a lot of difficulties, like liaising with the Ministry of Health and customs,” Suzuki said of starting his business. “There was also no place to make the products. I really started from scratch.”

But Suzuki thinks CBD has vast potential. It has since branched out to items such as tinctures and even pet treats, and recently collaborated with a florist in Tokyo’s upscale Aoyama district to display its wares in its storefront.

Although Suzuki says the industry is still small, it is growing, with US-based Medical Marijuana Inc. saying the Japanese division of its CBD sales subsidiary recorded its best month of revenue in May.

According to data provider Statista, Japan is set to become the second largest CBD market in Asia by 2024, behind China.

With the widespread stigma surrounding anything cannabis-related in Japan, a Kyodo News interviewee who asked to be known only by her initials YI said CBD had really helped ease the anxiety triggered by his bipolar disorder.

“A lot of people think cannabis is equivalent to hard drugs. But I think they would accept it if it was promoted for medical purposes,” the person said.

Mizuki Ishii, 33, agrees. Cannabis, she says, is generally demonized in Japan, although those who have lived abroad tend to think differently. Ishii says she is a regular user of CBD, which she first bought to help with her PMS.

Although it didn’t alleviate the immediate symptoms, Ishii said the CBD helped her sleep better and she now shares a bottle of tincture with her boyfriend.

“There are a lot of youth-oriented stores selling CBD recently, mostly to women and in trendy packaging,” she said.

“Compared to the older generation, I think a lot of young people have a better impression of it.”