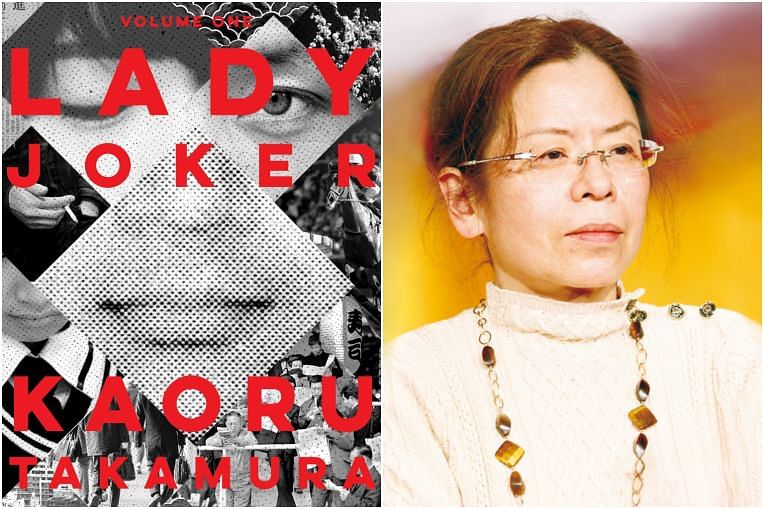 Lady Joker is an epic 576-page tome – and the story isn’t even over. The first of a two-part series, with the second slated for release next year, it’s a detailed fictional tale of an actual unsolved crime of the 1980s.

Kaoru Takamura is an award-winning veteran author with 13 novels to her name and made her debut in 1990, but Lady Joker, first published in 1997, is her first title to be translated into English.

It has also been adapted for film and television in its native Japan, where it is used as material for literature lessons.

Takamura is known as a maestro of crime and psychological fiction, often taking off primed and appropriate facades to shine the spotlight on the invisible undersides of Japanese society.

The fates of these men intertwine after the death of pharmacist Seizo Monoi’s grandson – a key figure in the quintet – in a mysterious high-speed car crash after being forced to break up with Shiroyama’s niece, Yoshiko Sugihara.

And in a true-to-life nugget, where senior executives of large Japanese companies are usually linked, Yoshiko’s father, Takeo, is a director at Hinode Beer.

If this web of relationships already seems confusing, it is only the tip of the iceberg. There are so many characters that the book begins with a glossary of 27 names that make up the dramatis personae.

Lady Joker is loosely based on a series of real-life kidnapping, extortion, and harassment cases from 1984 to 1985. The mastermind, dubbed The Monster With 21 Faces, has never been stopped. Confectioners like Glico and Morinaga have been targeted, their products poisoned and companies extorted for money.

Readers who expect a fast-paced thriller similar to works like Keigo Higashino will be disappointed. Takamura’s writing is like a report, his words are factual, not colorful.

It won’t be the easiest novel to go through, either, as Takamura delves into the finer details of bank and corporate balance sheets, with a poorly done staging.

Yet the magnum opus stands out for its immaculate and visceral social commentary. Takamura takes the reader to 1990s Japan, which languished in economic slump after the asset bubble burst.

It shines a light on the underprivileged and minorities in society, who remain ostracized to this day, although they have no visible sign that they are different from ordinary Japanese.

Monoi was born into a family of burakumin, or hamlet, the rejected subclass of a feudal social hierarchy system that was dismantled in 1871. One of his friends is a Zainichi, an ethnic Korean whose ancestors have was forced to move to Japan during the war. .

Even though the material is over two decades old, the themes of Lady Joker’s corporate governance and societal disaffection remain highly relevant today.

Considering its low action, it is not for everyone. But it will appeal to readers who appreciate clever mysteries and those who want a deeper insight into the hidden shadows of Japanese society.

If you like it, read: The Decagon House Murders by Yukito Ayatsuji, translated by Ho-Ling Wong (Pushkin Press, 2020, $ 19.94, Available here). The Smart Mystery of the Closed Room, first published in 1987 and inspired by Agatha Christie’s And Then There Were None (1939), has been credited with launching the shinhonkaku (New Orthodox) mystery sub-fiction genre in Japan .