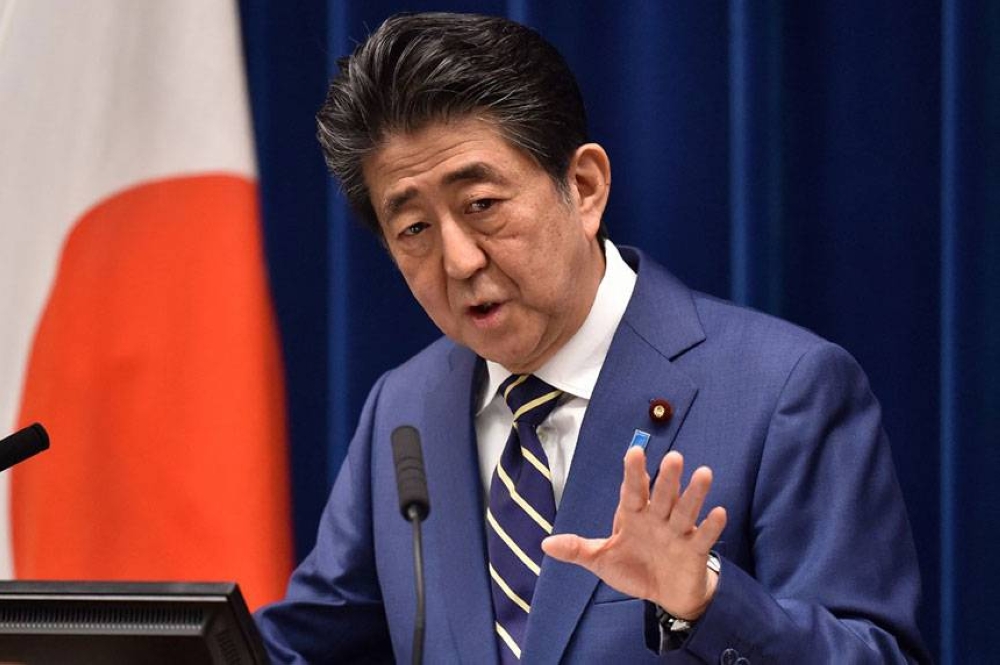 This file photo from March 28, 2020 shows then Japanese Prime Minister Shinzo Abe answering questions during a press conference in his office in Tokyo. AFP PHOTO

Reading media reports of tributes paid to slain former Japanese Prime Minister Shinzo Abe and Japan’s peaceful ways, I thought of the famous saying that “Journalism is the first draft of history.” It is useful to remember this because much of the chatter is only a draft and not already the verdict of the story.

The media, especially the Western media, has been quick to elevate Mr. Abe to near-mythical status and tout Japan as the epitome of peace and stability. There’s hardly a footnote to the other stories struggling to crack the accolades; such as the history of political violence in Japan and Abe’s record as an ultranationalist.

The gripping description of journalism as the rough draft of history is widely attributed to the late former president and publisher of the Washington Post, Philip Graham.

Get the latest news

delivered to your inbox

Katharine Graham, Graham’s widow and former editor of The Washington Post, quoted his remarks to Newsweek foreign correspondents in London in 1963, in her 1997 autobiography Personal History.

“So today, let’s continue to work on our inevitably impossible task of delivering a first draft of a story every week that will never be completed on a world we can never truly understand.

“The inevitable press rush inevitably means a degree of superficiality.”

Western media are only now beginning to correct the exaggerated praise and come to a more measured judgement.

In the UK Spectator of July 9, 2022, Francis Pike, the historian and writer, wrote an article entitled “Shinzo Abe and the long history of Japanese political violence”. He wrote:

“Shinzo Abe was the dominant politician of his time. Forced to give up the premiership after just a year in 2007 due to ulcerative colitis, a congenital disease, Abe returned to win a landslide election for the Liberal Party Democrat in 2012, 2014 and 2017. At a time when many Japanese prime ministers served for just over a year, Abe served as prime minister for a record eight years and 267 days. Abe almost certainly would have served longer if there had not been the return of his illness in 2020.

“No wonder then in the face of the real global shock. “Japan has lost a great Prime Minister,” French President Macron said. “Taiwan has also lost an important and close friend.”

“Indian Prime Minister Narendra Modi has announced that July 9 will be a national day of mourning. Modi’s reaction is not a surprise. Australia….

“However, the praise of Shinzo Abe has a major fault line. Geopolitical necessity compelled Western powers to cover up the fact that Abe was an ultranationalist Holocaust denier – the Chinese Holocaust that is.

“Abe was a longtime member of Nippon Kaigi, an organization of 38,000 members, including 40 current and former ministers, dedicated to restoring Japan’s imperial wartime constitution.

“Coincidentally, Abe’s maternal grandfather, Nobusuke Kishi, was the mastermind behind the economic enslavement of millions of Chinese for the industrial militarization of Manchuria. Kishi later signed the declaration of war against the United States. United in 1941. After the war, Kishi, a prominent war criminal, escaped prosecution and became one of the founders of the LDP, serving as Prime Minister from 1957 to 1960.

“Unsurprisingly, in 2013 Abe caused a storm of protests across Asia when he visited the Yasukuni Shrine where convicted Japanese war criminals are buried. Even at the end of his term, Abe was not rebuilt in his attitude to Japan’s wartime atrocities.

“Out of convenience or perhaps laziness, the West tends to ignore the narratives of mythologization woven by the Japanese establishment in the post-war period.

“The mythologizing of post-war Japan also applies to the widespread idea that the country is a void of peace and stability. For example, the BBC report on the death of Shinzo Abe noted that ‘ This is a country not used to dealing with political violence.’

“That’s hogwash. Assassination, sneak attack, ambush, are completely rooted in Japan’s political and military tradition, hence the sneak attack on Port Arthur in Russia in 1904 and the attack on Pearl Harbor in 1941. Violence has always been one of the means of finding political solutions.The most famous example in Japanese culture is the story of the 47 Ronin (unattached samurai).After a powerful court official, Kira Yoshinaka, forced their master to commit seppuku (ritual suicide by self-disembowelment), the 47 The ronin disguised themselves and carried out bloody revenge. assassins like heroes.

“Japan’s violent political culture was transmitted to a modernizing Japan during and after the Meiji Restoration. The samurai resisted changes that undermined their traditional role in society. Assassinations by these regressive samurai became commonplace during this period.

“The culmination of assassinations came in the 1930s when the Japanese armed forces became imbued with a toxic mix of pseudo-Bushido code and National Socialist philosophies that arguably predated the rise of fascism in Germany. In November 1930, Prime Minister Hamaguchi Osachi, who was blamed for the London Naval Treaty, a battleship limitation agreement seen as a national humiliation, was shot dead by a member of the Aikokushu (Patriots Society) and is died of his injuries nine months later.

“Over the next six years there were the assassination of three other former or current prime ministers while young naval and army officers, often supported by their elders, effectively ended democratic government. in Japan in two episodes of bloodshed targeting political and economic figures.

“Throughout the 20th century, ritual suicide was used as a violent political act. In 1970, the great Japanese novelist and political activist, Yukio Mishima and his followers, who denounced Emperor Hirohito for renouncing his divinity , committed seppuku in the offices of a Japan Self-Defense Force (JSDF) commander.

“When we look at the assassination of former Prime Minister Shinzo Abe, then, we shouldn’t fool ourselves into thinking that Japanese society is the island of calm that some Japanophiles imagine. Underlying this seemingly rigidly controlled and conformist society , where crime levels are a fraction of the West, there is an undercurrent of extreme violence that has long historical roots.”

Japan restored to the world stage

The Financial Times, in a July 9, 2022 editorial, extolled Abe’s role in restoring Japan’s place on the world stage. He wrote :

“As Japan’s longest-serving Prime Minister, Shinzo Abe brought unusual political stability and optimism to the country; his shocking assassination evoked memories of the political violence that raged as World War II approached. He is Japan is unlikely to return to those dark days when targeted assassinations were used to bring Democratic politicians to heel, but whatever the lone gunman’s motives were, the shootings reverberated around the world.

“Abe’s second term as Prime Minister, from 2012 to 2020, made him one of the world’s most recognizable statesmen; a feat in itself given that prior to his first term in 2006 -2007, Japan had nine prime ministers in 16 years.This recognition, coupled with his assertive promotion of his country, restored Japan to the world stage after years of economic and diplomatic stagnation.Abe remained a political heavyweight after his resignation; he was campaigning ahead of Sunday’s elections for Japan’s upper house when he was shot dead on Friday at the age of 67.

“A political prince – his grandfather, who was accused of being a war criminal, was later released without charge and later became Prime Minister – Abe lacked the common touch. Yet his brand of sense of the polarizing but charismatic spectacle propelled him to become, at 52, the country’s youngest prime minister since World War II and the first to be born after the war’s end.

“It is Abe’s policies, not just his record premiership, that cement his legacy, but his political longevity has allowed him to centralize power and given him time to enact the sweeping reforms needed. His name will be still associated with “Abenomics” – his brand of militant economic policy that his successors, Yoshihide Suga and now Fumio Kishida, still widely support. His measured optimism lifted a more self-confident Japan out of the long darkness of its post-war history. .

“Breaking from Abe’s molds has not always been welcome. His nationalist, and at times revisionist, reading of history caused scandal during his first term, especially with South Korea for his approach to atrocities. But his conservatism also led to a reinterpretation of Japan’s post-war pacifist constitution in 2015. Although deeply controversial at the time, this allows Japan to maintain military forces for the ” collective security” with allies.

“His assassination will cast a pall over Sunday’s election, which will almost certainly cement Kishida’s position. Abe’s abrupt and untimely end will ensure his name endures far beyond Japan.”