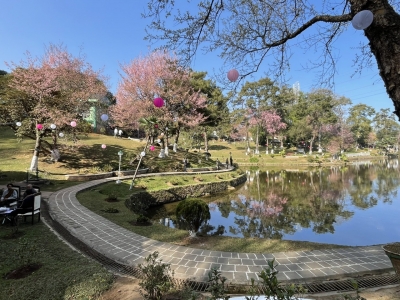 The festival, which was unable to take place last year due to the Covid-19 pandemic, coincides with the annual bloom of pink cherry blossoms in most areas of the state capital and many other areas of the mountainous state.

The first edition of the Shillong Literary Festival, which is also part of the Cherry Blossom Festival, was also launched on this occasion.

Various competitions including song and dance, fashion shows, local wine making, and Japanese and Korean food preparation, among other events, are said to take place during the three days of the festival.

Addressing the inaugural function, Suzuki said he was impressed with the various state facades on display throughout the festival and also informed that the cherry blossom or “Sakura” is the national flower of Japan, which is also an inspiration to the Japanese people. .

The Meghalaya has the potential to attract more tourists, especially from different parts of the world, due to its unique landscape and environment, he said.

Suzuki also informed that Japan is relaunching the TITP (Technical Intern Training Program) to allow international workers to work for up to five years in Japan.

“India and Japan signed a Memorandum of Cooperation (MoC) on a basic partnership framework for the operation of the Specified Skilled Worker (SSW) system under which the Japanese government accepts foreign nationals who have a certain level expertise and skill, ”Japan said. said the envoy.

The SSW is a new residence status created by Japan in 2019 under which qualified Indian nationals can obtain employment and stay in Japan.

Suzuki also said that Japan is proud to be a close partner of northeast India on the basis of historical ties, trust and friendship.

Sangma said the northeast region has immense potential and talent, and the region is a good platform for enterprising people.

“As Meghalaya would celebrate 50 years of statehood early next year, a series of events and programs would be undertaken to enable young people to show off their talents,” he said. .